Will US Restrictions on Russia Hurt Academic Exchange?

Update Required To play the media you will need to either update your browser to a recent version or update your Flash plugin.
By Dan Friedell
19 March 2022


Nations around the world have already established economic, cultural and travel restrictions on Russia. Now, colleges across the United States are facing pressure to put in place educational limits against the country.

The restrictions could affect the exchange of students between the two countries. And they could end research projects that receive money from universities in the U.S. 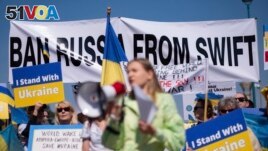 As nations around the world are imposing financial restrictions on Russia, people in education are worried about the future of academic exchange between Russia and the U.S.

For many American colleges, the first concern has been to bring American students studying in Russia or Ukraine home. About 1,400 Americans studied in those nations in 2018, but the numbers have dropped sharply during the pandemic.

When Russia invaded Ukraine, Middlebury College in Vermont suspended a study abroad program in Russia at the end of February. The school urged the 12 students to return home immediately for safety reasons.

Among them was Zavier Ridgley of Tulane University in New Orleans. Ridgley said he was sad to leave. He called the program in Moscow "the opportunity of a lifetime."

Other schools, like Dartmouth College of New Hampshire, are canceling future study programs in Russia. And some are ending financial and educational ties in the country.

Soon after the invasion, the Massachusetts Institute of Technology, MIT, said it was ending its partnership with a school in Moscow called Skoltech, an English-language technology university it helped start in 2011. MIT officials called it a rejection of "the unacceptable military actions against Ukraine."

The University of Colorado said it was giving up all investments, including $3.5 million, in Russia. The move came after Colorado state leaders urged the school to cut ties.

In the state of Arizona, all public universities said they were ending ties with Russia. And Arizona State University said its business school will end connections with a training center in Moscow. State leaders in Ohio and Virginia have also asked their public universities to end investments in Russia.

Stanford University, however, is not ending its $1.6 million Russian contract for computer-based business courses. The university said it is in "full compliance" with the U.S. restrictions.

Russian students in the U.S.

The 2021 Open Doors Report said about 5,000 students from Russia studied in the U.S. last year. In addition, just under 2,000 Ukrainian students were in the U.S.

Following the invasion, a few American lawmakers pushed for visa restrictions against Russian students. One even called for sending Russian students home. Speaking to CNN last month, Representative Eric Swalwell said the U.S. should consider sending "every Russian student out of the United States."

Supporters of international education say losing those students would end a chance for them to learn Western ideals. They say Russians who study in America are already more likely to want changes back home.

Jill Welch is a senior adviser for a group of university presidents called the Presidents' Alliance on Higher Education and Immigration. "Leaders need to make a distinction between Putin and Russian people who want a better life," she said, mentioning Russian President Vladimir Putin. "Sending anyone back wouldn't shorten the war by a day."

That is a concern for Liudmila Fedorova, a professor at Georgetown University in Washington, D.C. Fedorova was born in Russia and studied in Moscow.

"It's extremely important not to cut ties with Russia. Most of the students who do come to study English, they oppose the regime. And actually, especially now there will be many students from Russia applying for American programs."

Fedorova told VOA that she worries about the exchange of ideas between the U.S. and Russia if study programs are shut down.

"I know that the most important thing now is the war in Ukraine, but I am also very much concerned about my friends in Russia who fight for peace, who find themselves in danger. And there is no escape for them."

opportunity – n. a chance or time in which something can be done

partnership – n. a connection or relationship, two groups working together

compliance – n. the act of doing something that is required, following a rule

ideals – n. an idea or standard of perfection or excellence

distinction – n. the separation of people or things into different groups

regime – n. a form of government or management

apply – v. to ask formally for something such as a job or place at a school