With No Students, Small College Town Worries over Future

Update Required To play the media you will need to either update your browser to a recent version or update your Flash plugin.
By Susan Shand
27 June 2020


Many colleges and universities in the United States are in small towns around America. When the coronavirus struck in March, students went home, leaving the towns empty.

So, what will happen to those communities in the near future? The New York town of Ithaca is about to find out. 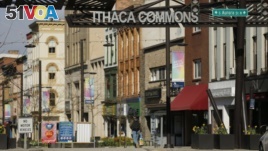 In this April 15, 2020 photo, a lone pedestrian makes their way through the Ithaca Commons in Ithaca, N.Y. Most of the almost 24,000 students at Cornell University and 6,200 more from Ithaca College effectively vanished in March when the pandemic struck. (John Munson/Cornell)

In Ithaca, most of the 24,000 students at Cornell University and 6,200 from Ithaca College have left. Now, locals who run businesses that depend on students' money are wondering if things will ever return to normal.

"It's going to be hard. I mean, normally we have about seven months that the colleges are here," said Gregar Brous. He runs several restaurants in Ithaca. He has brought about 100 of his usual 330 employees back to work.

Brous added that one of the biggest problems for small businesses is that there are "so many unknowns."

Many people expect that even if students do return, they will mostly stay on campus and not go out to restaurants and bars. Locals also worry that returning students will bring COVID-19 into their community.

Ithaca Mayor Svante Myrick said it is possible international travel restrictions could affect Cornell, since almost 25 percent of the university's students are from other countries.

"If people don't feel comfortable sending their children across the country or across the world back to our campuses, then we'll start to shed jobs," Myrick said.

Cornell students spend an estimated $225 million each year in Ithaca. There are many stores and restaurants on the Ithaca Commons, a shopping area near the campus.

Before coronavirus, "it was so easy to get a job. You couldn't avoid it, they were everywhere," said Matt Stupak. He was a cook, but lost his job when restaurants closed.

Ithaca is still doing well compared to other places in the U.S. The area's April unemployment rate increased to 10 percent, but that is lower than other parts of New York. Cornell University is the area's largest employer, with 10,000 workers. So far, it has not had any job cuts. The university also gave $100,000 to help local businesses.

But in many college towns, the local economy collapsed when the students went home.

Amherst, a college town in Massachusetts, had to deal with the sudden loss of 35,000 students from the University of Massachusetts at Amherst and four other colleges in the area. By May, Amherst had a 32.6 percent unemployment rate, a study by the Pioneer Institute in Massachusetts found.

Even if schools permit students to come back in the fall, no one knows how many will actually choose to return. Some students -- and their parents -- may not want to pay the high cost of tuition for a less social college experience.

"How worried am I for Ithaca if the future of higher ed(ucation) changes?" Myrick said. "I am worried. I am extremely worried."

The Associated reported this story. Susan Shand adapted it for Learning English. George Grow was the editor.

campus - n. the area around a university or college

shed - v. to lose or to get rid of something

tuition - n. the cost of education

mayor - n. the elected eader of a town or city