Women in Delhi Use Open Information Law to Get Services

Update Required To play the media you will need to either update your browser to a recent version or update your Flash plugin.
By Alice Bryant
09 December, 2017


A law that permits Indians to get information about their government is helping a group of women in Delhi get needed services.

The women have led a successful campaign demanding that city officials improve access to water, waste removal services and transportation.

The women live in Savda Ghevra, a slum resettlement colony for people who have been moved from extremely poor areas. It is the largest such colony outside of the city of New Delhi.

The success of the women is a rare example of poor people in India using the Right to Information Act to change their community.

When they hear the water trucks arrive, residents of Savda Ghevra rush out of their homes to fill their containers. Doing this can be difficult. But after living without access to tap water for many years, residents are pleased that the water truck comes every day.

"We used to bring water from such a long distance," said Urmila Devi. "We could not even offer anyone a glass of water; we had to keep it for our children."

Devi was among the 30,000 people who were moved to a place outside the city when India's capital was preparing for the 2010 Commonwealth Games.

However, the people in the colony have been struggling to get services they need, such as clean water.

But the situation started to change when women like Devi learned how to use the law to get basic services. 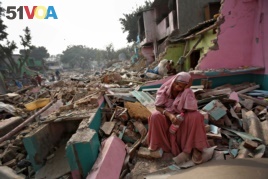 A woman reacts amid the rubble of her home in a slum which was razed to the ground by local authorities in a bid to relocate the residents, Delhi, India, November 2, 2017.

The women filed applications under the Right to Information Act. They learned that trucks that were supposed to bring water to their area were going to other places. This is a common problem in Delhi where there is not enough water. Often, the trucks would go to places where residents could pay for the water.

The requests led officials to place tracking devices on the water trucks. In addition, a device was installed in Savda Ghevra to supply water in case home supplies become low.

The Right to Information Act became law in 2005. Since then, citizens have filed tens of thousands of applications through it. They have sought information about things like damaged roads.

The success that the women had with accessing water moved them to demand other services, such as public toilets and a health center. A community center also is being built.

Few public buses used to serve the area, but that has recently changed, too.

Learning how to file the documents was not easy for these women, many of whom have difficulty reading and writing.

At first, their writing was not very good, Devi said. But, it slowly improved, especially with the help of younger boys and girls involved in the project.

The community learned to file the applications and to deal with city officials through a project led by a nonprofit organization called Marg.

Devi and the other women remember traveling for long distances to attend the meetings. After believing for their whole lives that they did not have legal rights, it was hard for them to believe that they did.

It took the women almost one year to learn how to petition officials.

Mohammed Noor Alam is the program manager at Marg. He says women were the most willing to learn because they are the most affected by lack of services, especially water.

Alam says filing the application for water taught the women that they could claim other rights. He also says this has created lasting change.

Women like Nazra Khatun are now turning their attention to social problems such as safety for women and young girls.

She said that the women feel empowered after their efforts. Now, they would like to end domestic violence in their community.

The power of activism has turned these women into community leaders, Alam said. "They are like hawks keeping watch on everything." When women lead such a holistic change, all of society can progress, he said.

access – v. a way of being able to get or use something

slum – n. an area of a city where poor people live and the buildings are in bad condition

tap – n. a device for controlling the flow of a liquid or gas from a pipe or container

file – v. to give something, such as an official form or a document, to someone in authority so that it can be considered

install – v. to make a machine ready to use in a certain place

toilet – n. a large bowl attached to a pipe that is used for getting rid of bodily waste and then flushed with water

petition – v. to ask a person, group, or organization for something in a formal way

domestic violence – n. violent behavior in the home, commonly involving the violent abuse of a spouse or romantic partner

hawk – n. a kind of bird that kills other birds and animals for food

holistic – adj. relating to or concerned with complete systems rather than with individual parts