Update Required To play the media you will need to either update your browser to a recent version or update your Flash plugin.
By John Russell
31 December, 2017

The two leaders discussed international diplomacy and the arms race. Gorbachev proposed to Reagan an idea for an international project to develop fusion energy for peaceful purposes

One year later, international leaders reached an agreement: the Soviet Union, Japan, the U.S., and the European Union would work together to design a large international fusion center. Later, other countries joined the agreement.

Some 30 years after Gorbachev and Reagan's meeting, the project is continuing. The facility, named the International Thermonuclear Experimental Reactor, or ITER, is often called the most complicated scientific instrument in the world.

ITER is being built in southern France. And now, the director of the ITER project says the facility is 50% complete and on track to produce low-cost energy. This energy will come from what is basically a very small star at ITER's core. Although small, it will burn 10 times hotter than the Sun.

All of the nuclear reactors in the world depend on nuclear fission to create energy. Nuclear fission uses the splitting of uranium atoms to create a lot of heat. The process creates a lot of energy but also dangerous radiation. 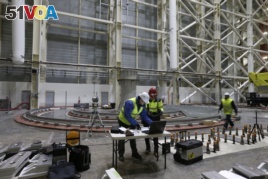 The assembly hall of the ITER ( the International Thermonuclear Experimental Reactor), in the CEN of Cadarache, is pictured in Saint-Paul-Lez-Durance, southern France

ITER is different. It aims to use the power of nuclear fusion – the forceful joining of hydrogen atoms to create helium atoms. The fusion process releases a lot of heat but very little radiation.

The biggest problem is that nuclear fusion requires conditions similar to the core of a star – although on a much smaller scale.

Bernard Bigot is the director of ITER. He describes the extreme conditions scientists must create for fusion to take place:

"The plasma will be at 150 million degrees. Very little quantity, very small quantity of matter, only 2 grams of hydrogen but with very high temperature. And we need to confine this plasma in order that is could fuse, which means collide and produce new atoms."

Scientists are building electromagnets nearly 300 thousand times stronger than earth's magnetic field. These electromagnets will help keep the superhot plasma in the center of a tube.

The job of building ITER is so huge that it requires the cooperation of 36 countries. The European Union is covering 45 percent of the cost. The final price will likely be more than $26 billion.

The U.S. covers about nine percent of the total cost. But, proposed budget cuts would reduce U.S. financing by half. However, President Donald Trump has asked his administration to reconsider the budget cuts.

If financing is not reduced, the first plasma ignition at ITER may happen as soon as 2025. The current plan is for full power production by 2035.

George Putic reported on this story for VOA News. John Russell adapted it for Learning English. Caty Weaver was the editor.

fission – n. a process in which the nucleus of a heavy atom is split apart

plasma – n. a substance that is similar to a gas but that can carry electricity

electromagnet – n. a piece of metal that becomes magnetic when an electric current is passed through or near it