Update Required To play the media you will need to either update your browser to a recent version or update your Flash plugin.
By Phil Dierking
30 March, 2017


American Astronaut Peggy Whitson set the world record on Thursday for most spacewalks ever made by a woman.

She set the record while floating out of the International Space Station to set up a new parking spot for commercial crew capsules. SpaceX and Boeing are building the capsules.

It was the eighth spacewalk of Whitson's career.

A spacewalk is when an astronaut performs a task or mission while outside of their spacecraft in space.

Whitson and her spacewalking partner, station commander Shane Kimbrough, took the spacewalk in order to complete work on the space station's docking port. Kimbrough disconnected the port during a spacewalk last Friday and then flight controllers in Houston moved it to a new location Sunday. 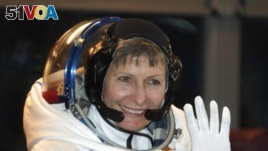 For Thursday's spacewalk, the astronauts needed to hook up important heater cables to the docking port. They also needed to install shields to protect against strikes by micrometeorites.

The port will serve as the second of two docking ports for the future SpaceX and Boeing crew capsules.

An unexpected turn of events

The mission did not go completely as planned, however. During the spacewalk, the astronauts lost one of the important cloth shields needed for the space station.

NASA says it is not yet clear who let the shield go or how it floated away. The shield is to be attached to the station or astronauts at all times.

Each shield weighs about 8.2 kilograms. When unfolded, the shields are about 5 kilometers thick, NASA says.

The astronauts did report that the three remaining shields were successfully installed.

Midway through Thursday's spacewalk, Whitson was set to break another record. She beat the current time record for total spacewalking time by a woman. The record was 50 hours and 40 minutes. It was held by former space station resident Sunita Williams.

Williams will be one of four NASA astronauts who will make early test flights of the SpaceX Crew Dragon and Boeing Starliner capsules. The first flight of these capsules could take place as early as next year.

Whitson, who is 57, has been in orbit since November. She is the world's oldest and most experienced spacewoman. This is her third stay at the space station. She has spent more than 500 days off the planet. That is more days than any other woman.

Whitson is set to return to Earth in June. But she may stay in space for an extra three months, until September. NASA is hoping she can return to Earth then on an extra seat in the Russian Soyuz spacecraft. It is expected to launch next month and return in September.

This story was originally written by Marcia Dunn for the Associated Press. Phil Dierking adapted this story for VOA Learning English. Ashley Thompson was the editor.

Have you ever set a record? We want to hear from you. Write to us in the Comments Section or on 51VOA.COM.

astronaut – n. a person who travels in a spacecraft into outer space

capsule – n. a small part of a spacecraft that is separate from the rest of the spacecraft and that is where people live and work

micrometeorites – n. a micrometeoroid that has entered the earth's atmosphere.

spacewalk – n. a task or mission performed by an astronaut outside a spacecraft in space

spacecraft – n. a task or mission performed by an astronaut outside a spacecraft in space