Update Required To play the media you will need to either update your browser to a recent version or update your Flash plugin.
By Ashley Thompson
12 June, 2018


An international shortage of airplane pilots is putting the air travel industry's recent growth at risk.

The lack of pilots has caused more planes to stay on the ground. It has also meant that higher pay has cut into airline companies' profits. At the same time, labor unions around the world are pushing for more pilot benefits.

Airlines such as Dubai-based Emirates and Australia's Qantas Airways have poured resources into hiring. But both companies have struggled in recent months to use their their planes as often as their business plans permit because of delays in training new pilots.

Pilots for Ireland's Ryanair are forming labor unions across Europe. They are seeking better working conditions. And pilots with Air France are striking over pay. 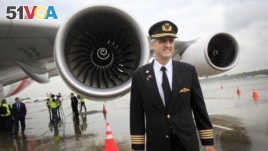 Richard de Crespigny, the pilot who was responsible for safely landing a damaged Qantas Airbus plane in 2010, stands in front of the engine (AP Photo/Wong Maye-E)

In the United States, pilots who took pay cuts when some companies went bankrupt 10 years ago are receiving big raises.

Airlines are now reporting strong profits. However, the increase in employee costs comes as higher oil prices are already creating financial stress on the industry. Airlines say ticket prices have not risen at the same speed as the companies' costs have.

The high cost of pilot training and several years of earlier hiring freezes in places like the U.S. and Australia are some of the reasons for the pilot shortage.

The industry needs many new pilots. Boeing estimates that number to be 637,000 more pilots over the next 20 years. And the International Air Transport Association estimates airline traffic will nearly double during that same period.

Companies like the Canadian training group CAE Inc and L3 Technologies are building new flight simulators to profit from the demand for pilot training. Planemakers Airbus and Boeing also are expanding into training services.

In addition, some airlines are planning to expand their own training programs. Qantas says it will invest over $15 million in a new school for pilots. Emirates opened a $135-million flight training school last November.

The domestic chief executive officer for Qantas said, "We have a social responsibility...We can continue to take pilots from smaller players in this country and elsewhere but we need to give back and that is part of what we are doing here as well."

Some airlines are having to look outside their home markets. They must compete with China, where experienced foreign pilots are in high demand. Airlines there offer yearly salaries of up to $314,000 - tax free.

Andrew Herdman is director general of the Association of Asia Pacific Airlines. He said, "There is not so much a shortage of pilots as a rising cost of attracting and retaining the pilots you need."

In countries where average wages are comparatively low, pilots are being offered higher pay than other professions. This is partly because they must speak English, the worldwide language of aviation.

The chief of SriLankan Airlines told Reuters that his company has lost pilots to airlines in the Middle East.

Pilot unions are taking advantage of shortages to ask for better conditions for their members.

Dan Adamus is president of the Air Line Pilots Association (ALPA) Canada. He said Canadian pilots are generally getting pay raises. Salaries at major U.S. airlines are still higher than at Air Canada, however.

Adamus said, "It's certainly harder for airlines to recruit pilots...The pilots are going to go where there is better pay."

He estimates that about 1,000 Canadian pilots are flying for foreign airlines such as Emirates.

Airlines considered to be top employers in their home country, like Qantas and British Airways, are not yet facing shortages of people seeking to be pilots.

Reuters reported this story. Ashley Thompson adapted it for Learning English. Mario Ritter was the editor.

benefit - n. money that is paid by a company (such as an insurance company) or by a government when someone dies, becomes sick, stops working, etc.

hire - v. to give work or a job to (someone) in exchange for wages or a salary

simulator - n. a machine that is used to show what something looks or feels like and is usually used to study something or to train people

domestic - adj. of, relating to, or made in your own country

advantage - n. something (such as a good position or condition) that helps to make someone or something better or more likely to succeed than others

recruit - v. to find suitable people and get them to join a company, an organization, the armed forces, etc.