Update Required To play the media you will need to either update your browser to a recent version or update your Flash plugin.
By Dan Novak
12 October 2021


Superman is taking part in National Coming Out Day.

The day is observed on October 11 to support lesbian, gay, bisexual and transgender people.

The new Superman Jon Kent, the son of the first Superman Clark Kent and reporter Lois Lane, is bisexual. The development is part of DC Comics' latest series. 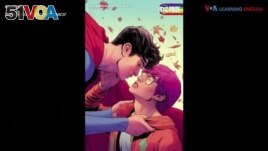 The young man kisses reporter Jay Nakamura in issue five of the comic book "Superman: Son of Kal-El." The book will be released on November 9.

Tom Taylor is the comic's writer. He told reporters with Reuters, "It's not a gimmick." A gimmick is a trick or device meant to gain attention.

Taylor wore clothes with a rainbow-colored Superman "S." He said that when he was offered the writing job, he thought there was a chance to offer readers something different.

"I thought, 'Well, if we're going to have a new Superman for the DC Universe, it feels like a missed opportunity to have another straight white savior," he said.

"People are saying for the first time ever they're seeing themselves in Superman - something they never thought was possible," he said.

The new Superman also cares about climate change and refugees.

Taylor said Jon Kent is "a very new hero finding his way, fighting things his father didn't as much."

Rollo Ross reported this story for Reuters. Dan Novak adapted it for VOA Learning English. Ashley Thompson was the editor.

rainbow — n. a curved line of different colors that sometimes appears in the sky when the sun shines through rain

opportunity — n. a curved line of different colors that sometimes appears in the sky when the sun shines through rain

savior — n. someone who saves something or someone from danger, harm, failure, etc.