A Beloved Family Pet Dies. What Does a Mother Tell Her Children?

Update Required To play the media you will need to either update your browser to a recent version or update your Flash plugin.
By Christopher Cruise
2012-2-7

Detail from the book "Sammy in the Sky"

What do you do when a family pet dies? How would you explain the death of a dog or cat to a young child? If you are an award-winning writer, you think words can help because they help you. So you search for a book that will help your children understand what has happened. When you are unable to find such a book, you decide to write one -- a book that tells the story of a girl who could not understand why her dog went away.

Recently, Christopher Cruise spoke with writer Barbara Walsh about her book "Sammy in the Sky." He also spoke with artist Jamie Wyeth about paintings he produced for the book.

READER: "Daddy wrapped Sammy in a blanket, and we knelt by his side. I petted Sammy's head and kissed his warm nose. ‘You're the best hound dog in the whole wide world,' I whispered. Sammy's breathing grew slower and slower until it stopped. ‘He's gone,' Daddy said, his voice soft and strange. Mommy held me close as Daddy carried Sammy to the backwoods to bury him. ‘Good-bye, Sammy,' I cried."

CHRISTOPHER CRUISE: Barbara Walsh's daughters were three and five years old when their pet dog died of cancer. Sammy the hound lived to be twelve years old. Nora and Emma had never known life without Sammy. He had been in the childless family before they were born. Sammy had been the child -- the family's first dog. But he was not jealous or angry about the new babies when they arrived. And he was not threatened by their presence. He welcomed them with dog kisses and endless patience. He let the girls put pieces of clothing on him. They sometimes slept on top of him. They played with him every day.

So when Sammy died, the children missed him every hour of every day. Their mother said he had gone up into the sky. "When was Sammy coming back," the girls asked. "Where did he go?"

Barbara Walsh has had a long career and great success as a newspaper reporter. She has won many journalism awards, including the most important one – The Pulitzer Prize. She valued words and writing, and newspapers and books. So she looked for a book that would help her daughters deal with their deep sadness about losing Sammy. But she was unable to find one.

Barbara Walsh
Yes, there were books about dealing with the death of a pet. But, Ms. Walsh says those books "avoided the tough questions."

She says she "could not find anything that dealt with death honestly at a child's level." Her daughters were angry that Sammy could not come back. They kept asking questions about why he left and why he was no longer with them. She knew they needed help dealing with that anger.

Because she was a reporter, Miz Walsh started writing down Emma and Nora's words as they dealt out loud with Sammy's death. And she saw in those words a book.

BARBARA WALSH: "They kept saying things to me, like, you know, Emma, who loves Sammy, Sammy was her best buddy, she was...'Can he come back?' And, and you know, ‘Where did he go?' And Nora, who was younger, and, you know, she would look up in the sky and say ‘Sammy you come down here.' She's like, ‘He's bein' a bad dog.' She was scolding him, and then she'd say ‘If Daddy gets a really tall ladder maybe he can go get Sammy.' And so while they spoke I wrote these things."

For six years Barbara Walsh wrote and rewrote, and rewrote again. She read her words to groups in Maine - the state where she lives with her family. Veterinarians, teachers, parents and children all cried when they heard her read about Sammy's death. And they loved the book, especially the children -- from the early versions to the final work. They said it was needed. It was real. Crying, they said, was OK. It was part of life.

Ms. Walsh says feeling sad about the death of a pet is "a natural, inevitable process." She says "if you feel grief, you must have at one time felt love, and that love needs to be honored and remembered."

But publishing companies did not want to publish her book. Their agents felt it was too sad. They said people would not buy it.

BARBARA WALSH: "The agents weren't willing to take a chance on it. And I, I bet they're sad they didn't now."

Even after the well-known artist Jamie Wyeth agreed to produce paintings for the book, publishers still rejected it. They said it was just too real.. But Barbara Walsh says she knew they were wrong about "Sammy in the Sky."

BARBARA WALSH: "And I told my daughters this book will be in a bookstore one day. And I, I just refused to give up on it because everyone that read it was really moved by it. And yes it's sad, but dogs die, people die, it's part of life. We all have to deal with grief and move on and I just refused to give up on it. It's okay to tell a story about a dog dying and its okay to cry and its okay to be real. You know, kids aren't stupid – I mean, they know their pets and people die, so why are we trying to hide that from them?"

Jamie Wyeth made more than twenty paintings for the book. Mr. Wyeth is the son of painter Andrew Wyeth, and a grandson of the artist NC Wyeth. Like his father and grandfather, his work is known throughout the world. Like Barbara Walsh, Mr. Wyeth lives in Maine and is known for his love of dogs. He has said he spends more time with animals than with people. He told the Portland Press-Herald newspaper that "a dog's death affects (him) much more than a person's death." 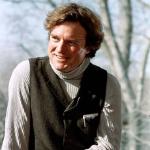 Jamie Wyeth
One day, Barbara Walsh placed a telephone call to Mr. Wyeth. He answered his phone, listened to her and said he would read what she had written to see if he had any interest in doing artwork for it. He says no to almost every writer who asks him to illustrate their book. But he told VOA that when he read "Sammy in The Sky," he said yes. It was not soft and safe, he said, and it was powerful.

JAMIE WYETH: "It was very affecting. I mean, I just, when I first read it, it was like it floored, you know, I mean it obviously moved me but I thought it was handled in such a, a simple, ah, sensitive way that it, I felt it sort of unique. And uh, and so I thought, well gosh, let me just try and see what I can do, so that's where it sort of began."

Mr. Wyeth says he worked off and on for a few years on the paintings, hoping to capture the words and emotions of the book. He wanted to show every emotion, even sadness. And when the publisher asked him to make some of the paintings less dark, less sad, he said no. Children are not stupid, he told VOA. They know when something is sad. The dark painting stayed in the book. He dedicated the book to all of the dogs he has loved and lost.

"Sammy in The Sky" is now in its third printing. Barbara Walsh found an agent who, she says, was honest and kind and who had no doubt that the book would sell.

Many stories have been written about the book. Ms. Walsh says tens of thousands of copies of "Sammy in The Sky" have been sold throughout the United States and in other countries, including Hungary, Ireland, New Zealand and England. Hundreds of people come to hear her when she reads it.

BARBARA WALSH: "People are using it to read to their children when their dogs die. People are buying it in memory of their dogs. Schools and libraries have it. And, I told my daughters early on, I said ‘This book will help other kids.' I couldn't find a book that could help them with their grief and, and deal with it honestly. This book is helping children - and even adults I think - deal with the loss of their pet or even a person whom they love."

Ms. Walsh says booksellers believe "Sammy in the Sky" is written for children aged four to eight. But she believes it is a book for children and adults of any age. She told VOA "any person ... can relate to this book; it is about love and loss, death and grief, reconciliation and reckoning with heart-felt and tender emotions."

Although Sammy's death broke their hearts, Barbara, her husband Eric Conrad and her daughters recovered. And life, as it always does, as it always must, went on. But there was an emptiness, an emptiness that could only be filled by a dog. A year after Sammy died, the family rescued Jack. And when we say rescue, we really mean it. Jack is a Tennessee coon hound. His former owners had severely beaten him, his mother and sister. They were left in the woods to die, dumped like trash.

After years of promises and love from Barbara and her family, Jack finally believes he will never again be hurt, or left to die. In Jack, the family now has a dear and loyal, trusting and protective friend. He is not a replacement for Sammy. No, that could never happen. But in Jack, as in Sammy, there is...a book. Barbara Walsh will write it through Jack's eyes, eyes still holding fear but now, love and trust.

MARIO RITTER: This program was written by Christopher Cruise, who also read our report. Daisy Bracken read from the book. I'm Mario Ritter. You can see some of the pictures Jamie Wyeth painted for the "Sammy in the Sky" book at our website, 51voa.com.