Update Required To play the media you will need to either update your browser to a recent version or update your Flash plugin.
By Shelley Gollust, Dana Demange and Caty Weaver
2009-10-15

I'm Doug Johnson. This week on our program:

We play music by Anjulie ...

And answer a question about actress Audrey Hepburn ...

But first, we celebrate a Special English anniversary.

Special English is celebrating its fiftieth anniversary next week. Mario Ritter tells us about some of the ways we are celebrating this event.

It all started when Henry Loomis became director of the Voice of America in nineteen fifty-eight. Mister Loomis traveled around the world. He saw that English was becoming an important international language. He wanted to make English easier to understand by listeners of VOA broadcasts whose native language was not English. So Mister Loomis asked VOA program manager Barry Zorthian to develop a way to broadcast to listeners with a limited knowledge of English. This new method of broadcasting used a limited vocabulary. And it was read slower than regular VOA broadcasts.

The first VOA broadcast in Special English took place on October nineteenth, nineteen fifty-nine. Critics at the time said this new method would never work. American embassies demanded that the program be cancelled. But Mister Loomis supported the program. Soon, VOA began to receive hundreds of letters from listeners praising the program.

In nineteen sixty-one Hal Berman became the first chief of Special English. He saved Special English from destruction by people who did not see its value. And he showed how to change one thousand five hundred words into a living language that informed, educated and entertained millions of people.

In the beginning, Special English had one fifteen-minute news show that was broadcast to Africa and Asia once a day. Today, Special English broadcasts thirty-minute programs by shortwave and medium wave sixteen times a day around the world. We are also heard on VOA affiliate stations.

The Special English Web site is one of the most popular of all VOA Web pages. We also have programs on satellite TV, podcasts, RSS feeds and mobile. We have a growing number of followers on Twitter and our own popular YouTube channel. And coming soon are videos on our Web site.

Help us celebrate our fiftieth anniversary! To thank our audience, we will choose fifty people and send them a Special English gift. Go to 51voa.com, and click on Contact Us on the left side. Under the subject line, just type "50." Tell us your favorite Special English program and suggest a new program or subject you would like to learn about. And be sure to tell us what city and country you are from.

Our question this week comes from China. Shaune wants to know about actress Audrey Hepburn.

Hepburn won an Academy Award as Best Actress for her first major American movie, "Roman Holiday," which was released in nineteen fifty-three. But she is remembered as much for her aid work as for her acting.

Audrey Hepburn was born in Belgium in nineteen twenty-nine. Her father was British and her mother was Dutch.

Audrey was sent to live at a British school for part of her childhood. During World War Two, she lived and studied in the Netherlands. Her mother thought it would be safe from German attacks.

Audrey studied dance as a teenager and during college when she returned to London after the war. But she realized she was not going to be a ballerina. So she began taking acting parts in stage shows. Later she began to get small parts in movies.

But it was Audrey Hepburn's move to America that brought her true fame. In nineteen fifty-one she played the character "Gigi" in the Broadway play of the same name to great critical praise. Two years later, "Roman Holiday" made her a star at the age of twenty-four.

Audrey Hepburn made more than twenty-five movies. Among her most popular roles were Holly Golightly in "Breakfast at Tiffany's" in nineteen sixty-one. Three years later she played Eliza Doolittle in "My Fair Lady."

She was married two times and had one son by each husband.

In nineteen eighty-nine, the United Nations Children's Fund named Audrey Hepburn a goodwill ambassador. She travelled all over the world in support of UNICEF projects.

The UN agency said she was a tireless worker. She often gave fifteen interviews a day to gain money and support for UNICEF projects. She also spoke before the United State Congress many times to appeal for aid for needy children.

Audrey Hepburn often said her loyalty to UNICEF was the result of her experiences as a child during World War Two. She said she knew what it was like to be starving and to be saved by international aid. She was a goodwill ambassador until her death in nineteen ninety-three from colon cancer. She was sixty-three.

Anjulie is a young singer who writes songs about falling in and out of love. Her music is influenced by the sounds of pop, reggae, and rhythm and blues. Critics are praising her first album "Anjulie" for its smartly written songs. Katherine Cole tells us more. 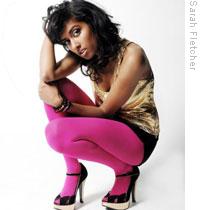 That was the song "Rain," which tells about the heartbreak of love. Anjulie has been singing and writing songs since she was very young. Her parents are from Guyana in South America. They raised Anjulie in Toronto, Canada. The Caribbean musical influence can be heard in several of her songs.

Now Anjulie lives in Los Angeles, California. She has written many songs for herself and for other performers. Here is the song "Fatal Attraction."

Anjulie says what makes her different from other artists is that her songs are extremely personal. She says she permits herself to express her insecurities and fears in her music in a way that would be impossible in real life.

This past summer, Anjulie had some unexpected good news. The video for her song "Boom" was nominated for a MTV Video Music Award for Best Breakthrough Video. While she did not win, the nomination gave her music a whole new level of attention. We leave you with the song "Boom."

I'm Doug Johnson. Our program was written by Shelley Gollust, Dana Demange and Caty Weaver who was also the producer. For transcripts, MP3s and podcasts of our programs, go to 51voa.com. You can also comment on our programs.

Do you have a question about people, places or things in America? You can send it to mosaic@voanews.comand we may answer it on this show.