Update Required To play the media you will need to either update your browser to a recent version or update your Flash plugin.
By Dana Demange
2012-4-21

BARBARA KLEIN: And I'm Barbara Klein with PEOPLE IN AMERICA in VOA Special English. Today we tell about Beverly Sills. Her clear soprano voice and lively spirit made her one of the most famous performers in the world of opera. Sills worked hard to make opera an art form that the general public could enjoy. She spent the later part of her career as a strong cultural leader for three major performing arts centers in New York City.

STEVE EMBER: That was Beverly Sills performing a song from the opera "The Tales of Hoffman" by the French composer Jacques Offenbach. Sills is singing the role of Olympia, a female robot who keeps breaking down while singing a series of high notes. This difficult aria gives a good example of the sweet and expressive voice that made Beverly Sills famous. 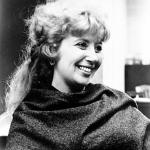 BARBARA KLEIN: Beverly Sills was born Belle Silverman in nineteen twenty-nine. Her family lived in the Crown Heights area of Brooklyn, New York. Her father, Morris, came from Romania and her mother, Shirley, was Russian. Sills said that her father believed that a person could live the real American dream only with an educated mind. Part of her early education came in the form of listening.

Beverly's mother played old opera records. The young child learned to sing by repeating the words of the songs. Shirley Silverman pushed Beverly at a young age to become a performer. By the age of four Beverly was singing on a weekly children's radio program and also making radio advertisements.

Beverly also had roles in several short movies. By the age of nine, she had a voice teacher, Estelle Liebling, who taught her the art of coloratura. Coloratura is a method of singing in which notes are added to make a part of a song more complex. Most coloratura sopranos can sing very high notes.

STEVE EMBER: Beverly graduated from professional school in nineteen forty-five. She then started singing with traveling opera companies performing the works of such composers as Gilbert and Sullivan. During these ten years she also made guest appearances at opera companies throughout America. She tried seven times to audition and be accepted into the New York City Opera. Finally, in nineteen fifty-five she succeeded. Also that year, Beverly Sills met Peter Greenough while she was performing in Cleveland, Ohio. She married him the next year and moved to Cleveland.

BARBARA KLEIN: Sills continued singing for the New York City Opera and traveled back and forth to Cleveland. In nineteen fifty-nine she had a daughter named Meredith. Two years later, she had a son, Peter. Beverly Sills and her husband soon learned that their daughter was deaf.

They also found out that their son had major developmental problems. He was mentally handicapped and autistic. In nineteen sixty-one, Sills stopped singing to take care of her children during this difficult time. Her daughter slowly learned to go to school and lead a normal life. But her son later had to live in a care center with medical professionals. 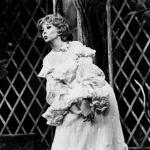 Beverly Sills sings the role of Norina in Donizetti's "Don Pasquale, " at the Metropolitan Opera in New York

STEVE EMBER: In time, Beverly Sills returned to work. Here she talks about how her family's situation changed her professionally. The recording is part of a two thousand six documentary movie about her life:

BEVERLY SILLS: "My whole attitude about life is different and naturally it affected my singing. It affected my whole attitude about my career. How can I be affected by a trivial thing that someone will say to me backstage, that perhaps that they did not like my singing? How can I be affected by that? That's something that's a million miles from me! I felt as far as my singing was concerned that the only person I really had to please was me."

Beverly Sills' big break into fame took place in nineteen sixty-six when she performed Cleopatra in Handel's "Julius Cesar." Her performances received some of the greatest critical praise of her career. Here is a song from that opera.

BARBARA KLEIN: Two years later Sills received more praise for her role in the French opera "Manon." One critic wrote that if he had made a list of the wonders of New York City to give a traveler, he would put Beverly Sills as "Manon" at the top of the list. She would even be ahead of the Statue of Liberty and the Empire State Building! Here is Beverly Sills singing the part of Manon.

STEVE EMBER: Over the next twenty years Beverly Sills became known as "the queen of American opera." In addition to singing, she often appeared on popular television shows. Audiences liked her because of her laughter and funny jokes. Most American opera singers at the time went to Europe for training and jobs. But Sills learned her art in America and that's where she performed. She limited her visits to foreign countries so she could always be near her children.

BARBARA KLEIN: When she did perform internationally, critics highly praised her performances. In nineteen seventy-three she performed Donizetti's "Lucia de Lammermoor" at Covent Garden in London. Here is the famous mad scene where Lucia becomes wild with sadness over a lost love. It is one of the more difficult songs in opera to sing, but Sills performs the aria beautifully. 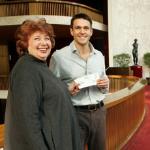 STEVE EMBER: Beverly Sills retired from singing in nineteen eighty. But she did not leave the opera world. She became director of the New York City Opera. For eight years she worked hard to modernize the City Opera. She also raised millions of dollars to keep it operating. She later held other important positions, including chairwoman of the board of supervisors for New York City's Lincoln Center for the Performing Arts. In two thousand two, she became chairwoman of New York's Metropolitan Opera House before retiring for goodthree years later.

Beverly Sills died in two thousand seven of lung cancer. She was seventy-eight. She once said that she had never been a happy woman. But she said she had always been able to feel cheerful because her work kept her going.

We leave you with Beverly Sills singing the role of Violetta in Giuseppe Verdi's opera "La Traviata." In this magical performance you can hear the joyous celebration she found in music.

STEVE EMBER: And I'm Steve Ember. You can learn more about famous Americans and download scripts and audio of our programs at 51voa.com. Join us again next week for PEOPLE IN AMERICA in VOA Special English.