Update Required To play the media you will need to either update your browser to a recent version or update your Flash plugin.
By Brianna Blake
2010-3-5 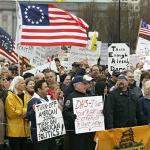 Some conservatives in the United States have found a new voice. The Tea Party is not a nationally recognized political party. So far it is a movement loosely organized around a common identity. There are different, and in some cases competing, Tea Party groups around the country.

Some people accuse the movement of being controlled by the Republicans. Others say the activists are independent thinkers who will oppose any politician they see as supporting big government and big spending.

Tea Party activists see themselves as modern-day versions of the anti-tax protesters from before the American Revolution.

The Boston Tea Party was a protest of British taxation of tea. One night in seventeen seventy-three, a group of colonists went onto three ships in Boston Harbor. They threw tons of tea into the water.

The famous saying "no taxation without representation" expressed the anger of the colonists.

Linda Hernandez is a Tea Party activist in Maryland. She spent many days last summer yelling at her television, she says, in reaction to the health care debate. Then she became involved with a local Tea Party group online.

They protested outside the president's health care meeting with Democratic and Republican lawmakers.

LINDA HERNANDEZ: "Today we're here because we're against the health care bill. We feel like it's wrong. It's a power grab for the government."

Ron Kirby is a member of the Northern Virginia Tea Party and Tea Party Patriots.

RON KIRBY: "Most of us don't feel that the government makes the best decisions for us. We would rather make our own decisions."

So what might those be? Political scientist John McGlennon at the College of William and Mary in Virginia says it is too soon to know.

JOHN MCGLENNON: "I think the Tea Party movement is a very amorphous one right now that is really a collection of people who are frustrated, angry or worried, but who don't necessarily either have the same basic objectives, nor necessarily agree with each other about the best ways to move forward. Their general uniting force is just that they're unhappy right now with the way things are."

SARAH PALIN: "The Tea Party movement is not a top-down operation. It is a ground-up call to action that is forcing both parties to change the way that they are doing business, and that is beautiful." 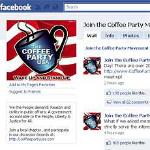 But conservatives are not the only ones organizing. Another new group has been growing through Facebook in reaction to the Tea Party. The Coffee Party Movement uses the slogan "Wake Up and Stand Up."

Its founder, Annabel Park, is a documentary film maker. She says the Coffee Party shares the Tea Party's unhappiness with Congress. But she says fixing the government does not have to mean making it the enemy.

Now the Tea Party and the Coffee Party can both pour their efforts into the congressional elections this November.