Counting the Votes in Iraq Only the First Step

Update Required To play the media you will need to either update your browser to a recent version or update your Flash plugin.
By Brianna Blake
2010-3-12 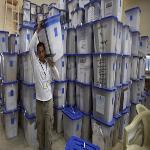 Photo: AP
Ballot boxes from the parliamentary elections in Iraq

The State of Law coalition of Prime Minister Nouri al-Maliki took an early lead. But full results from all eighteen provinces are not expected for days.

No single group is expected to win a clear majority. Building a coalition to form a new government could take months.

At least thirty-eight people were killed Sunday in a series of attacks in Baghdad. But the violence and threats by insurgents failed to stop millions of Iraqis from voting.

Voter turnout was lower than in the last national elections in two thousand five -- sixty-two percent compared to seventy-six percent. But it was higher than some predictions.

There have been some reports of cheating, including accusations made by the Iraqiya coalition of former Prime Minister Iyad Allawi.

At the White House, President Obama noted that Sunday's voting was only the beginning of a long process. But he said the voting made it clear, in his words, "that the future of Iraq belongs to the people of Iraq."

BARACK OBAMA: "Today, in the face of violence from those who would only destroy, Iraqis took a step forward in the hard work of building up their country. The United States will continue to help them in that effort as we responsibly end this war and support the Iraqi people as they take control of their future."

President Obama praised the Iraqi security forces which took the lead in providing protection for voters. The next government in Iraq will have to take full responsibility for the security of the country.

That still leaves Afghanistan. On Wednesday, by a wide majority, the United States House of Representatives rejected a call for a quick withdrawal of American troops. Democrat Dennis Kucinich of Ohio offered the resolution. He said it was time for Congress to reconsider America's involvement in Afghanistan.

Ileana Ros-Lehtinen of Florida, the top Republican on the House Committee on Foreign Affairs, opposed the resolution. She noted the recent success of an American-led offensive in Afghanistan.

ILEANA ROS-LEHTINEN: "Our brave men and women are making steady progress against the deadly foe and are doing so at great risk to their lives. This offensive is already producing dramatic success, including the capture of senior Taliban leaders, the routing of their forces and the stabilization of key areas."

President Obama decided late last year to send additional troops to Afghanistan. But he wants to begin a withdrawal from that country in July of next year. Defense Secretary Robert Gates, in Afghanistan Wednesday, said it could begin sooner if conditions permit.