WHO Urges Ban on Blood Test for Tuberculosis

Update Required To play the media you will need to either update your browser to a recent version or update your Flash plugin.
By Caty Weaver
2011-8-16 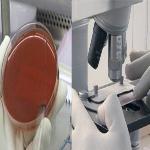 Photo: VOA
A petri dish and microscope slide used in the sputum test which takes longer but is more accurate.

The World Health Organization is urging health officials to ban commonly-available blood tests for tuberculosis. W.H.O. officials made the call after two studies found that results from a commonly used test are undependable and misleading.

The blood tests are low-cost and produce fast results. They are widely used in developing countries, especially India. The Indian government says the country has more than two million new cases of TB a year.

But, researchers say the tests being sold are dangerously inaccurate. They say the results are wrong in fifty percent of patients.

David Dowdy studies infectious diseases at the Johns Hopkins Bloomberg School of Public Health in Baltimore, Maryland. He led one of the studies.

DAVID DOWDY: "These tests are actively doing people harm by causing them either to take medicines that they don't need or delaying the diagnosis that they actually do need, to get better."

Traditional tests for TB examine the sputum, a material found in a person's lungs. Active TB is identified if certain bacterium grows in the test material. However, these tests take longer to carry out. Dr. Dowdy says the blood tests are widely used because of the speed of results.

The leader of the other study was Madhukar Pai, an epidemiologist at McGill University in Montreal, Canada. He says the tests are usually used by private medical centers -- not government TB control programs.

MADHUKAR PAI: "So these tests are uniformly not used in the developed world. They are mostly used in countries with weak regulation, and lack of regulation allows these sorts of tests to be on the market and used freely."

Experts say the blood tests are a big business in developing countries, worth millions of dollars a year. The World Health Organization says a million of the tests are done every year. But, the tests are not approved by any recognized supervisory group.

Dr. Pai also says the WHO is pushing scientists to continue research for a quick test.

MADHUKAR PAI: "[Be]cause someday we want a simple dipstick-like test for TB, as we have for HIV and malaria. But right now we don't have such a test for TB for point of care use."

And that's the VOA Special English Health report, written by Caty Weaver, with reporting from Jessica Berman and Vidushi Sinha. For more health news and to learn English, go to 51voa.com. And follow us on Facebook and Twitter at VOA Learning English.  I'm Christopher Cruise.