Update Required To play the media you will need to either update your browser to a recent version or update your Flash plugin.
By Christopher Jones-Cruise
20 September, 2017


A United Nations report says Afghanistan's version of the Islamic State group has expanded its activities to all seven provinces in the country.

It said the group operated in just one province last year.

The UN Office of Humanitarian Affairs reported an increase in fighting between Afghan forces and Taliban militants this year. But it said attacks by the Islamic State of Khorasan Province (ISK-P) weakened security in the country. 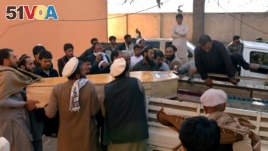 Afghan men carry the coffin of a victim of a deadly suicide attack in Kunar province, east of Kabul, Afghanistan, Saturday, Feb. 27, 2016. At least 10 civilians were killed Saturday morning when a suicide bomber on a motorcycle targeted on a local tribal leader near a park, an Afghan official said. The tribal leader Khan Jan was among those killed. (AP Photos/Mohammad Anwar Danishyar)

The UN report said the growing insecurity "is not only characterized by increased attacks on district centers, but also by a doubling of attacks attributable to...(the) Islamic State of Khorasan to more than 230 in the first half of the year."

The report noted that until the first half of 2016, the Islamic State forces operated only in the eastern province of Nangarhar. United States and Afghan officials have repeatedly said that the group is operating in southern Nangarhar and parts of nearby Kunar province. They claim that ground and air attacks in recent months have killed hundreds of fighters linked to the group and reduced the territory it controls.

The UN group said an increase in fighting in Afghanistan displaced more than 50,000 civilians in August. That is the largest monthly displacement of Afghan civilians this year.

It also said that Taliban-led militants attacked or fought for control of at least eight district centers in seven Afghan provinces during the month.

From January to the end of July, anti-state armed groups attacked and took control of more than 12 district centers across the country. Afghan security forces have since retaken control of just two of them. There has usually been heavy fighting involved in retaking the centers.

The U.S. military dropped more than 550 bombs in August, the most in one month. Last week, a U.S. official told VOA that most of the bombs were dropped on Helmand and Nangarhar provinces.

The United Nations says the number of Afghan civilians killed or injured this year has reached record levels. It has called on all sides to protect civilians.

The UN agency says insecurity in Afghanistan is likely to increase during the rest of 2017. It said no seasonal end to the fighting is expected because winter is expected to arrive later than normal Afghan winters.

Fighting is expected to increase after U.S. President Donald Trump announced a "new strategy" on Afghanistan last month. The new policy is designed to end the conflict with the Taliban in what has become the longest foreign military operation in U.S. history.

On Monday, Defense Secretary Jim Mattis announced that the U.S. is sending another 3,000 troops to the country. That is an increase of more than 25 percent in the number of American troops there.

The latest deployment will increase the number of U.S. forces in Afghanistan to more than 14,000. The Afghan war began almost 16 years ago when U.S. forces were ordered to overthrow a government led by the Taliban and members of the al-Qaida terror group. The invasion followed the al-Qaida-led attacks against New York and Washington on September 11th, 2001.

characterize – v. to describe the qualities of someone or something

attributable - adj. of or related to qualities belonging to a person or thing