Age Is Not the Only Risk for Severe Coronavirus Disease

Update Required To play the media you will need to either update your browser to a recent version or update your Flash plugin.
By Ashley Thompson
04 April 2020


Older people remain most at risk of dying from the new coronavirus disease, COVID-19. The majority of people who get COVID-19 have minor or moderate sickness. But "majority" does not mean "all." So, who else should be concerned about contracting severe, even deadly, cases of COVID-19?

It may be months before scientists have enough data to say for sure who, aside from the old, is most at risk and why. But, medical experts have already learned some helpful information from numbers on early cases around the world. 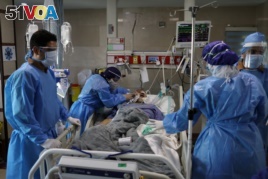