Update Required To play the media you will need to either update your browser to a recent version or update your Flash plugin.
By Susan Shand
10 September 2021


The tragic events of September 11, 2001, took place in just under 102 minutes. On that day, 2,996 people died in the worst terrorist attack in modern history.

What followed was nearly 20 years of war in Afghanistan. The U.S. Department of Defense says there were at least 2,325 American military deaths. No one knows exactly how many civilians were killed.

The Global War on Terror, as it was called, stretched beyond Afghanistan into Iraq and places as far away as Africa. In Iraq, the conflict killed nearly 4,500 U.S. service members and many thousands of civilians. 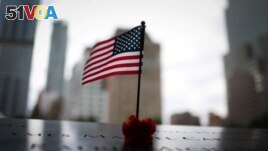 An American flag and red rose stand in the names of those lost at the edge of the south reflecting pool of the 9/11 Memorial & Museum ahead of the 20th anniversary of the 9/11 attacks in lower Manhattan in New York City, New York, U.S., September 8, 2021. (REUTERS/Mike Segar)

On September 11, 2021, President Joe Biden is expected to try to mark the end of that period and America's longest war.

Since withdrawing all troops from Afghanistan at the end of August, the Biden administration has sought to put the events of 20 years behind it. It has released many formerly-secret documents about the September 11 attacks. It appears to have accepted the return of Taliban militants, the Afghan leaders pushed out by the U.S. invasion nearly 20 years ago.

On Saturday, Biden will visit the three places that were attacked.

Biden will also visit the Pentagon, the headquarters of the U.S. defense department, outside Washington, D.C. That is where American Airlines Flight 77 crashed 34 minutes later.

Separately, Biden and Vice President Kamala Harris will pay their respects at a field in Shanksville, Pennsylvania. That is where United Airlines Flight 93 crashed.

Jeremi Suri is a history professor at the University of Texas in Austin.

Harry Truman was the president of the United States from 1945 to 1953.

Suri said historians understand why Biden is asking Americans to look forward and not back.

"We have learned since 9/11 how to protect Americans from terrorism," she said, adding that those measures probably prevented another 9/11-style terrorist attack.

Vanderbilt University historian Thomas Schwartz, however, does not believe we can easily call an end to the era.

Pointing out that it takes two sides to have a conflict, one side cannot decide alone to end it, he said.

"I think the words of President Biden — and the deeds — of a fixed time for withdrawal from Afghanistan were a mistake and were an error in judgment that I think could affect the United States over the coming years," he said.

Norman Ornstein is a senior fellow at the American Enterprise Institute, a conservative public policy research group in Washington.

He believes that Americans should look to history to understand our position. In 1983, President Ronald Reagan decided to withdraw American forces from Lebanon months after a bombing killed 241 U.S. service members. That decision, Ornstein said, shows the difference between the America of today and the America of past decades.

"We did not have calls for Ronald Reagan to resign, or moves to impeach him," he said. Republican lawmakers have strongly criticized the U.S. evacuation from Afghanistan and President Biden.

Ornstein said Reagan's actions in 1983 were not considered for political reasons as almost everything is today.

"And that is a disturbing element here that actually is at least as unsettling in terms of where the country goes in the future as some of these other threats that we face," he said.

deed – n. something that is done; an act

era –n. a period of time that is associated with a quality, event or persons

challenge –n. a difficult task or problem; something that is hard to do

impeach –v. (law) to charge a public official with a crime done while in office

disturbing –adj. something that is worrying or upsetting