Update Required To play the media you will need to either update your browser to a recent version or update your Flash plugin.
By Dan Novak
09 September 2021

As Taliban fighters took control of the city August 16, Ghani left Afghanistan for the United Arab Emirates in a helicopter. He denied taking government money as he left.

"I left at the urging of palace security, who advised me that to remain risked setting off the same horrific street-to-street fighting the city had suffered during the civil war of the 1990s," Ghani said in a statement. "Leaving Kabul was the most difficult decision of my life, but I believed it was the only way to keep the guns silent and save Kabul and her 6 million citizens." 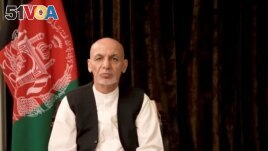 FILE PHOTO: Afghan President Ashraf Ghani makes an address about the latest developments in the country from exile in United Arab Emirates, in this screen grab obtained from a social media video on Aug. 18, 2021.

The 72-year-old Ghani said he worked for 20 years to create a democratic government in Afghanistan. But he admitted that he, like other Afghan governments of the past, had failed to create "stability and prosperity."

Ghani said he would give more detailed reasons for why he fled in the "near future." He denied accusations that he left Afghanistan with millions of dollars.

Russia's RIA news agency reported that he fled Kabul with four cars and a helicopter full of cash. He had to leave some cash behind because he could not fit it all in, RIA reported.

The charges are false, Ghani said in his statement.

He added that he and his wife have been responsible in their personal finances and has publicly declared all his money and property. Ghani said he would welcome a United Nations review of his finances or another independent investigation.

In an interview with Afghanistan's TOLO news channel, the United States Secretary of State Antony Blinken was asked if he helped Ghani flee the country.

Blinken replied, "What he told me in that conversation the night before he fled is that he was prepared to fight to the death."

stability — n. the quality or state of something that is not easily changed or likely to change

prosperity — n. the state of being successful usually by making a lot of money