Update Required To play the media you will need to either update your browser to a recent version or update your Flash plugin.
By Dan Novak
03 September 2021


Japanese Prime Minister Yoshihide Suga said Friday he will not run for re-election as head of the ruling Liberal Democratic Party, or LDP. The announcement effectively ends his run as prime minister just a year after it began.

"I have decided not to run for the party leadership elections, as I would like to focus on coronavirus measures," Suga told reporters at a Tokyo press conference.

Suga became prime minister last September. He took over for Shinzo Abe, who stepped down for health reasons. The son of a farmer, Suga enjoyed public support ratings as high as 70 percent early in office. He was seen as a leader of common people, rather than of powerful political families like Abe. 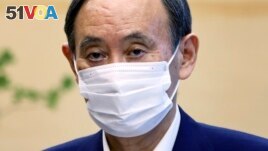 However, Suga's political popularity sharply fell as he struggled to control the coronavirus pandemic. He came under strong criticism about his approach to the health crisis from the public and his own party.

Much of the criticism has centered on his decision to host the Tokyo Olympics this summer even with widespread public opposition. He had hoped that a successful Olympics would increase his public support.

Shortly after the Games began in late July, Japan saw its worst increase in coronavirus infections. Suga put in place states of emergency to slow the spread. But they have had little effect.

A recent survey by public broadcaster NHK shows that 60 percent of Japanese people are unhappy with Suga's response to the virus. Many are also unhappy with the country's vaccine effort. Vaccination rates have only recently started to rise.

Corey Wallace teaches at Japan's Kanagawa University. He said in many ways Suga's biggest problem was his poor communication skills. Suga has been criticized for giving overly hopeful messages about the state of the crisis.

"And that's just made it very hard for him to overcome all these little problems, all these little criticisms, all the doubts that people have about whether the government is fully in control or is just reacting to what comes up at any given time," Wallace said.

Efforts to stay in power

In an effort to stay in power, Suga had planned to restructure his cabinet. However, he failed to win the support of several important party leaders. Many were worried about their own position in the upcoming election for the lower house of the legislature known as the Diet. The election must happen before the end of November.

Most observers expect the LDP to keep its majority in the election. However, the party has performed poorly in several recent local elections.

William Gallo reported this story for Voice of America and Mari Yamaguchi reported it for The Associated Press. Dan Novak adapted it for VOA Learning. Hai Do was the editor.

focus — n. a subject that is being discussed or studied

response — n. something that is said or written as a reply to something

overcome — v. to defeat (someone or something)