In Kabul, Some Fear Economic Collapse More Than Taliban Rule

Update Required To play the media you will need to either update your browser to a recent version or update your Flash plugin.
By Ashley Thompson
03 September 2021


At a pizza restaurant in downtown Kabul, workers and customers are worried about Afghanistan's new Taliban rulers.

Some, however, say they are more worried about economic collapse than things like being forced to grow long facial hair - a practice from the Taliban's earlier time in power. Others fear for the future of their children.

With the Taliban now in control, some in Kabul are thinking of ways to escape the country. 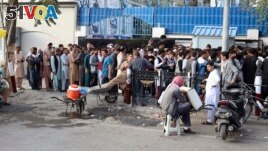 Afghans wait in long lines for hours to try to withdraw money, in front of Bank in Kabul, Afghanistan, Monday, Aug. 30, 2021. The Taliban have limited weekly withdrawals to $200. (AP Photo/Khwaja Tawfiq Sediqi)

"I have to run away so I can feed my family," said Mustafa, a server at another nearby fast-food place. He had come to the pizzeria for tea and to talk with friends working there.

Mustafa told the Associated Press that he has a family of 11 to support. He is considering seeking work in neighboring Iran. He said his earnings have been cut by 75 percent since the Taliban overran Kabul.

Pizzeria owner Mohammad Yaseen said daily sales have dropped sharply. He has been looking through old emails, searching for a foreigner who might help him resettle overseas. "It's not for me I want to leave, but for my children," he said.

Still, there is a sense of a return to business as usual across much of the Afghan capital. It is a different feeling than what was taking place at the Kabul airport, where thousands pushed toward gates for days, hoping for a chance to leave.

In much of Kabul, the usual busy traffic is back. Markets have opened. On the streets, the same police who served in the Washington-allied government of President Ashraf Ghani are still waving their hands trying to control the busy activity.

Taliban fighters have taken up positions in front of most government ministries. Some are in military clothes. Others wear the traditional Afghan clothes of loose pants and a long shirt called a tunic.

Street sellers have even been able to make a profit by selling the Taliban's white flag.

Shah Mohammad makes up to $15 a day selling different sizes of the flag. He makes his way through traffic, waving the small flags at passing cars. He also has full-size flags on offer. Before the Taliban takeover, he sold cloths for cleaning cars. He said that would earn him only about $4 a day.

But financial problems are affecting many others in the city.

Salaries have gone unpaid. Government ministries that employ hundreds of thousands of people are barely operating, even as the Taliban have urged some to return to work.

Outside the Afghan National Bank, thousands are lining up trying to take out money. The Taliban have limited weekly withdrawals to $200.

Noorullah has been operating a small store for 11 years. He said he has not had a single customer since the Taliban arrived on August 15. He said he cannot pay the rent on his store.

"The banks are closed. All the people who have money are running away from this country," he said. "No one is bringing money here."

Noorullah said he has no chance to leave. He is not sure he would leave even if he could. He said if the economy improved, he would stay -- even with the Taliban in power.

Thinking about the 20-year U.S. military presence in his country, Noorullah said, "America did not do a good job here. They let corruption grow until there was nothing left."

practice - n. the action of doing or using something