Pianists Learn to Play with an Extra Robotic Thumb

Update Required To play the media you will need to either update your browser to a recent version or update your Flash plugin.
By Bryan Lynn
03 September 2021


British researchers have explored how a robotic finger can affect a person's ability to play the piano.

The experiment involved attaching a robotic finger on the right hand of 12 test subjects. Six of the individuals were piano players. Six were not.

The leader of the project was Professor Aldo Faisal, a neuroscientist at Britain's Imperial College of London. Being a piano player himself, he said he wondered how his playing ability would be affected if he had an extra finger. 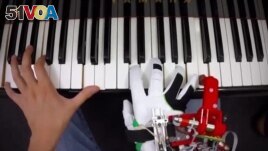 Pianists Learn to Play with an Extra Robotic Thumb

"So I started really with a robotics challenge," Faisal told Reuters news agency. "Can we build a robotic thumb that can sit on the opposite side of the right hand and play music with it?"

The robotic finger was controlled by electrical signals produced by the foot movements of the piano players.

Faisal said the robotic finger felt very unnatural and was difficult for players to get used to at first. But after a few hours using the device, he said it almost felt like "an extension of you."

Faisal noted that within an hour of being fitted with the robotic finger, six players had learned to use it effectively with the piano keys.

"There's a dedicated area of your brain responsible for every single finger," Faisal said. "If I give you an eleventh finger...are you processing it the same way as you're processing a regular limb?"

Researchers involved in the experiment reported that the six pianists and six non-playing volunteers all quickly adapted to using the extra thumb. They said this result suggests people are not limited to using an extra finger only for things they already know how to do.

"The fact that you can actually play with eleven fingers...has to do with how your brain is actually wired up," Faisal said. "So what we can say is it's a proof of existence. We can do it. So the next challenge would be, can we do two thumbs, so 12-fingers?"

He added: "It's a very exciting moment in time now to see what we can do."

piano – n. a large musical instrument with a keyboard that you play by pressing black and white keys and that produces sound when small hammers inside the piano hit steel wires

neuroscientist – n. a scientist who studies the nervous system and the brain

extension – n. the act of adding something to make it larger or longer

dedicated – adj. used only for one particular purpose or job

limb – n. an arm or leg of a person or animal