Update Required To play the media you will need to either update your browser to a recent version or update your Flash plugin.
By John Russell
01 September 2021


Better technology and rising wages are leading an increase in sales of robots to big companies all across America. But smaller factories have shown less interest in the devices. Robots are costly purchases.

Now, some investors are supporting a financial plan for a robot pay-by-use plan. This means smaller factories could pay to use a robot when they want its service, but they would not own the device.

Garry Tan's business Initialized Capital is one of the investors. He says he sees three important social and economic changes taking place now. 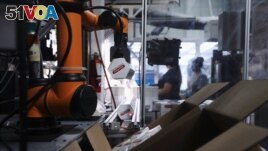 And, disagreements between the United States and China about supply chains have created more interest in robots, Tan said.

The investors' business plan puts much of the financial demand on new robot companies. These companies carry the risk of a manufacturer losing a business deal or changing a product. Smaller factories often produce smaller amounts of special products that do not need robotic support. And Silicon Valley Robotics, an industry group supporting robot startups, says that in the past, financing has been difficult.

Bob Albert's family owns Polar Hardware Manufacturing, a 105-year-old factory in Chicago. The company paid less than $10 an hour for a robot. It paid the average human more than $20 an hour.

Albert watched this month as a robot arm picked up a metal bar, spun around, and placed it in an older machine. Together, the machines created a door handle.

"If the robot works really well, we'll use it a lot," said Albert, who was pleased with the early results.

Westec Plastics Corp, in Livermore, California, got its first robot in January 2020 and now has three from Rapid Robotics. The company charges $3,750 a month for a robot in the first year and $2,100 a month starting in year two.

She also said she is saving about $60,000 in labor costs a year with one robot alone. "We've had to increase our wages quite significantly this year because of what is going on in the world. And luckily, Melvin has not increased his pay rate. He doesn't ask for a raise."

Jordan Kretchmer is cofounder and CEO of Rapid Robotics. He said he meets people who have doubts about robots. "A lot of times we've walked in and there's a graveyard of robots that they bought in the past," he said. But he added, "robots can be easy and they do work when they're in the hands of the right people."

Jane Lanhee Lee reported on this story for Reuters. John Russell adapted it for Learning English. Caty Weaver was the editor.

shift – n. the scheduled period of time during which a person works

graveyard – n. a place where old things are left or thrown away