Update Required To play the media you will need to either update your browser to a recent version or update your Flash plugin.
By Gregory Stachel
04 September 2021


Americans have been calling on police to change how they deal with citizens in crises, especially those with mental health problems.

Police are usually the first to arrive at a serious incident and are trained to deal with crime and violent behavior. But a law enforcement agency in the central state of Illinois has found a new way to deal with mental health cases. It is using video calls to calm difficult situations.

Restrictions ordered to stop the spread of the new coronavirus have left many people alone in their homes without support. Many people are unable to find mental health services or unwilling to go out and risk getting COVID-19. The Cook County sheriff's office has faced many emergency calls about suicide or other mental health crises recently. 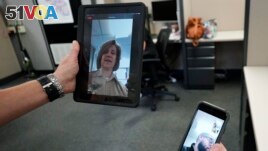 In this Friday, Aug. 13, 2021, photo Sheriff's Police Sgt. Bonnie Busching tests a video meeting from her personal electronic device with another person in the agency at the Cook County Sheriff's Office in Chicago. (AP Photo/Nam Y. Huh)

Sheriff Tom Dart leads the Cook County sheriff's office. In the United States, a sheriff is a law enforcement officer who serves parts of a state that are not part of a city or town. Emergency calls to Dart's office involving mental health problems have increased by 60 percent this year. Dart said police officers are being asked more and more to arrive first to mental health cases. He said officers are being asked to do things they are not trained for or for which they have little training.

Dart said some programs have mental health professionals riding in a vehicle with law enforcement officers. That works for smaller communities. But Cook County, which includes the city of Chicago, is very big.

"We wanted a tool for the officers to get that mental health expert on the scene immediately," said Elli Petaque-Montgomery, a team director.

So far, the department has 70 personal electronic devices. They are used to make video calls. The department bought 35 with aid money when the program began. It bought 35 more when it became clear the number of calls, which is now past 50, would increase.

Sometimes a lack of wireless service or another reason has not permitted a video call. The department said this has happened 20 times. In those cases, officers set up a telephone call between the person in crisis and a mental health professional.

Four mental health experts have been joined by four more to answer calls. Dart said the cost of the experts and the devices is much less than what it would cost to send out many mental health professionals with police. But, such a program cannot work unless police officers are ready to accept it.

Using video calls during a crisis

Bonnie Busching is an officer with the sheriff's office. She answered a call in which a man was striking his head on the ground to harm himself. When the man began threatening to use a knife, Busching sent an officer to bring the device for a video call. She watched the man immediately calm down when he began talking to the woman on the other end.

"People spend a lot of time on electronic devices, they're comfortable with them and they feel safer talking face to face with a person," said Petaque-Montgomery, who was on the other end of the call. She said that by handing the man the device, Busching showed a level of trust.

For Busching, questions about the device and concerns of what could happen if she forcibly restricted the man disappeared when the situation ended quietly.

"He gave me his hand and walked to the ambulance with me," she said.

Don Babwin reported this story for The Associated Press. Gregory Stachel adapted it for VOA Learning English. Mario Ritter, Jr. was the editor.

department – n. one of the major parts of a company, organization, government, or school

ambulance – n. a vehicle used for taking hurt or sick people to the hospital especially in emergencies

comfortable – adj. permitting you to be relaxed: causing no worries, difficulty, or uncertainty