Mourning Period for Orlando Victims Falling on US Flag Day

Update Required To play the media you will need to either update your browser to a recent version or update your Flash plugin.
By Jim Dresbach
14 June, 2016


President Barack Obama has declared a national period of mourning for the victims of the mass shooting in Orlando, Florida.

The president has ordered the U.S. flag lowered at the White House and all public buildings, military bases and navy ships until Thursday. Flags are also being flown at half-staff at all United States embassies and other offices overseas.

The move comes as Americans observe Flag Day. Flag Day is celebrated every June 14 across the country. June 14 is not a federal holiday. But it is a chance for people to recognize the importance of the flag and its place in U.S. history. 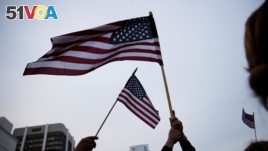 Crowd members wave American flags during a vigil downtown for the victims of a mass shooting at the Pulse nightclub Monday, June 13, 2016, in Orlando, Fla.(AP Photo/David Goldman)

The United States began as 13 British colonies. Each colony had its own flag. But the colonists fought under a common flag during the Revolutionary War against Britain.

The flag looked a lot like the U.S. flag does now. It had 13 red and white stripes for the 13 colonies. It had a square blue area in the upper left corner. Inside the blue area were the red cross and white lines of the British flag.

In 1776, the Americans declared their independence from Britain. The United States of America was born. The Continental Congress of the new nation approved a new flag on June 14, 1777. The 13 red and white stripes remained. But 13 white stars replaced the British flag in the blue area.

In 1818, Congress approved a law that said a new star would be added to the flag for each new state that joined the union. Today, there are 50 states, and 50 white stars in the blue area of the flag.

VOANews.com reported on this story. Jim Dresbach adapted the report for Learning English. George Grow was the editor.

half-staff – adj. flying a flag below the middle of a flag pole as a sign of respect or mourning

cross – n. an object or image in the shape of the letter X