Update Required To play the media you will need to either update your browser to a recent version or update your Flash plugin.
By Mario Ritter
12 June, 2016


Recent disputes over using white actors to play characters of color in Hollywood films have raised concerns that the media ignore minorities.

Activist groups have called for more minorities to be hired for media jobs. Some Asian Americans worry that they are becoming invisible especially in the entertainment industry.

They say minorities are often underrepresented and their opinions go unheard. Experts say that is a problem in television news also.

Asians represent the fastest growing racial minority in the United States. However, critics say there are few Asian faces reporting news across the country.

Juju Chang is an Asian American news anchor. She questions whether there is enough diversity in top management jobs.

"When I went on air at the network here, I was the only Asian-American and among the few women, and I'm sad to say that many all these many years later, I think that we've gone a long way in terms of diversity in front of the camera, but I think we still have a ways to go behind the scenes, especially in upper management.

Chang says it is important for minorities to take part in the approval process for story ideas.

"Until Asian-Americans get real traction in that sense, you know, we're going to keep pressing our noses against the invisible window." 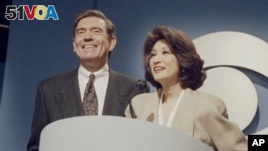 Dan Rather and Connie Chung share the podium at a news conference in New York, May 17, 1993 where it was announced Chung will join Rather as co-anchor of the "CBS Evening News."

Asians make up about three percent of the broadcast workforce while they are over five percent of the U.S population. Angie Chuang is a journalism professor at American University. She says a cultural bias may be to blame.

"The truth is that all kinds of psychological studies and employment studies have shown that we tend to favor or be more comfortable with people who are like us."

Some experts say Asians lack the political power of other minority groups such as African Americans and Hispanics.

One group pressing for greater representation of Asians in reporting is the Asian American Journalists Association. The group supports Asian-American reporters and those seeking journalism careers.

VOA spoke with the group's Vice-President for Broadcast Niala Boodhoo on Skype. She says there has been progress in recent years.

A leading broadcast industry group says 2011 was the best year for Asian American broadcasters. That year, Asians made up 3.5 percent of the industry. However, the percentage of Asians has decreased since then.

Many Asian-Americans are concerned issues important to their communities will continue to be misinterpreted or ignored.

Linda Ha reported this story for VOA News from Washington. Mario Ritter adapted it for VOA Learning English. Caty Weaver was the editor.

What do you think about how many Asians are seen in the news industry? Please tell us what you think in the Comments section, and post on 51VOA.COM, thanks!

characters – n. people playing parts in a film or play

invisible – adj. not able to be seen

diversity – n. including many different types or groups from different ethnic backgrounds

network – n. a system of connections, sometimes of programs, broadcast to different markets over a large geographical area

bias – n. to favor something not supported by facts, or unfair to someone or some group

misinterpret – v. to misunderstand, to not understand correctly

behind the scenes – adj. working or happening privately without being seen

management – n. those who make decisions about a business, department, sports team, etc.

tend – v. likely, or learning to one side