Update Required To play the media you will need to either update your browser to a recent version or update your Flash plugin.
By Mario Ritter
09 June, 2016

It appeared that Brazil's Senate would vote to remove Rousseff from office after the lower house voted to suspend her in May. She is accused of breaking budget rules before her re-election in 2014.

However, a series of resignations and mistakes have raised doubts in some lawmakers. The problems appear to support Rousseff's claim that she is a victim of a coup, or an attempt to seize power by a small group.

One undecided senator, Cristovam Buarque, told Reuters, "The presidency will be decided by two or three votes."

News media reported that Romario said he was no longer sure he would vote to remove Rousseff from office.

Missteps by the government of temporary president Michel Temer have increased doubts. Temer has appointed a cabinet of all white males. Groups around the country criticized the move. 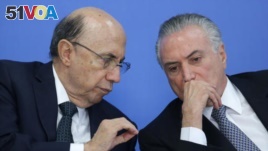 Reuters news agency reports that a government lawyer has requested the arrest of four top members of Termer's Brazilian Democratic Movement Party, the PMDB. The party has the largest number of lawmakers in Brazil's legislature.

The investigation has centered on illegal payments from Petrobras to members of Rousseff's Workers Party. But it has affected officials of the temporary government that replaced Rousseff's.

Members of Temer's team to improve the economy have stepped down because of the release of secret audio recordings. The country's Planning and Transparency ministers resigned last month.

However, temporary president Temer's attempt to get a verdict in the trial in July, rather than August, failed on Monday, according to Reuter's news service.

That means the verdict could come in the middle of August as the games are taking place.

The country also is battling a public health crisis. The Zika virus, linked to a serious birth defect and a disease of the nervous system, has been declared a worldwide health emergency.

The World Health Organization has warned pregnant women not to travel to places where Zika has been detected, including Brazil. The country is also considering emergency loans to Rio de Janeiro and two other states because of serious financial deficits.

Mario Ritter adapted this report from Reuters and AP materials. Kathleen Struck was the editor.

impeachment – n. the process of approving a trial to remove an official from office

coup – n. an attempt to seize power by a small group

verdict – n. a judgement made by a jury or legal body