A National Park for the Father of Parks

Update Required To play the media you will need to either update your browser to a recent version or update your Flash plugin.
By Ashley Thompson
30 December, 2016


The U.S. National Park Service has been celebrating its 100th anniversary in 2016.

Woodrow Wilson, America's 28th president, established the National Park Service in 1916 to "protect the wild and wonderful landscapes" in the United States.

But it is an earlier leader who is considered the father of the America's national parks. In 1906, Theodore Roosevelt, America's 26th president, signed the American Antiquities Act. The law permitted him – and future presidents - to take immediate action to protect important cultural or natural resources.

The Antiquities Act led to the creation of many of the 413 sites within the National Park Service today.

No president has played a bigger role in protecting the country's natural and cultural resources than Theodore Roosevelt. During his time in office, he established five new national parks and 18 national monuments. In all, he protected over 93 million hectares of public land.

He became known as "the conservationist president."

Roosevelt's concern for the land and environment came from the time he spent in the Dakota Territory, beginning in the 1880s.

The area where he traveled is now the state of North Dakota. Today, you will find a national park there named in his honor. The park protects badlands, wildlife, [and] scenic views, as well as two ranches where Roosevelt himself once lived. 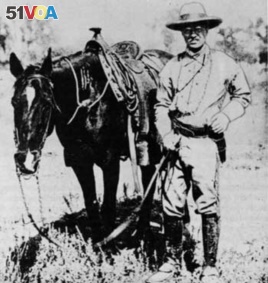 Theodore Roosevelt in Dakota Territory in 1883

Theodore Roosevelt came to Dakota Territory in September 1883. He was a young, married man from New York, where his political career was just beginning. He came to Dakota in hopes of hunting huge animals called bison. He also had a great interest in the Western frontier lifestyle.

Roosevelt soon developed an interest in raising cattle. Cattle ranching in Dakota was a big business in the 1880s. Cattle fed on the land's healthful grasses. He and a partner entered the business. Roosevelt invested $14,000 to build the Maltese Cross Ranch.

Roosevelt returned to New York while workers constructed the ranch. He resumed his political duties in Albany, the state capital. But, in early 1884, he experienced two great personal losses. His mother and wife died of illnesses on the same day, February 14. Roosevelt described the pain and loss in his diary with only one sentence: "The light has gone out of my life."

Roosevelt again headed west in the summer of 1884. He sought to escape the reminders of his recent losses. He arrived at his newly built Maltese Cross Ranch. He also decided to build a second ranch in a quieter, more remote area. He called that ranch Elkhorn. The front veranda of Elkhorn Ranch

Roosevelt traveled between New York and Dakota, working both as a state lawmaker and a cattle rancher. In late 1884, he helped form an organization in Dakota to help protect ranchers' rights.

In 1885, Roosevelt published his first book about his experiences as a rancher and hunter. In it, he predicted that the cattle industry of the Dakota Badlands was not sustainable. In other words, it would not last.

Severe weather struck the area in 1886 and 1887. In the winter, a terrible freeze killed many cattle. The animals that survived the cold soon starved. Roosevelt himself lost over half of his cattle. He decided to get out of the business.

The experience, however, shaped Roosevelt's beliefs about the need for conservation in America. Those beliefs, in turn, helped shape his policies as president.

Visitors to Theodore Roosevelt National Park today can experience the badlands just as Roosevelt did hundreds of years ago. They can also visit the Maltese Cross Cabin as well as the Elkhorn Ranch area.

The park has three main areas -- the South Unit, the North Unit, and the Elkhorn Ranch Unit.

In the South Unit, visitors can drive along the Scenic Loop road. It offers many places to see wildlife and the surrounding badlands. Badlands are very dry places with little vegetation. Wind and water shape badlands, mainly through erosion. The process leaves behind high, flat-topped hills of clay and other soft rock. 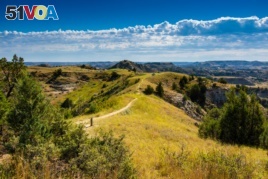 A hiking trail in the South Unit of the park

Many visitors stop to look at Painted Canyon. It gets its name from the colorful exposed rocks there.

Trails near the canyon offer visitors a chance to see animals, from the huge American bison to small black-tailed prairie dogs.

These animals are not really dogs. They are rodents. Roosevelt described prairie dogs as the "most noisy and inquisitive animals imaginable."

The North Unit also offers several hiking trails. Some paths are short and easy. Others may take two days to complete. 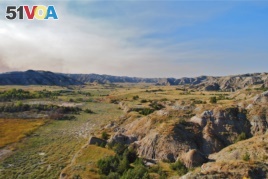 The Achenbach trail is a 28-kilometer-long path. It crosses the Little Missouri River and takes visitors into the heart of the Theodore Roosevelt wilderness.

The third area of the park is the Elkhorn Ranch Unit. This is what Roosevelt described as his "home ranch."

He wrote of the ranch in this way: "My home ranch-house stands on the river brink. From the low, long veranda, shaded by leafy cotton-woods, one looks across sand bars and shallows to a strip of meadowland, behind which rises a line of sheer cliffs and grassy plateaus."

Today, the Elkhorn cabin itself no longer stands. Visitors will find only stone rocks where the cabin once was. The area that surrounds Elkhorn, however, is among the most beautiful, wild and quiet places in the badlands of North Dakota.

It is this peace and beauty that appealed to Roosevelt after the deaths of his mother and wife.

But the Dakota badlands did more than just help Roosevelt overcome his pain. They helped shape the kind of president he would later become.

In the words of Roosevelt himself, "I would not have been president had it not been for my experience in North Dakota."

Ashley Thompson wrote this story with materials from the National Park Service. Caty Weaver was the editor.

Editor's Note: Each week in 2016, VOA Learning English has been exploring some of the many sites within the National Park Service. While this is the final week of our America's National Parks series, we will continue to write about this topic in the future! Let us know if you have any ideas or suggestions.

badlands - n. a region in the U.S. where weather has worn away rocks into strange shapes and where there are very few plants

ranch - n. a large farm especially in the U.S. where animals (such as cattle, horses, and sheep) are raised

cabin - n. a small, simple house made of wood

sustainable - adj. able to be used without being completely used up or destroyed

erosion - n. the gradual destruction of something by natural forces (such as water, wind, or ice)

inquisitive - adj. having a desire to know or learn more

veranda - n. a long, open structure on the outside of a building that has a roof

strip - n. a long, narrow piece of something

sheer - adj. almost straight up and down