Update Required To play the media you will need to either update your browser to a recent version or update your Flash plugin.
By VOA
16 December, 2015


In France, an anti-immigrant political party has lost regional elections.

The National Front had led in at least six of the country's 13 regions in the first part of elections last week.

But early results of the second round of elections show the Republican party of former President Nicolas Sarkozy and his center-right allies leading in seven regions. The governing Socialist and other leftist parties have won in at least five. 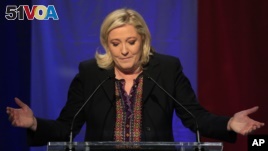 Far right National Front party leader Marine Le Pen delivers a speech after the announcement of partial results in the second round of regional elections, in Henin-Beaumont, northern France, Dec.13, 2015.

The National Front has gained support in recent years, namely in local elections in March and in European Union elections last year. The terrorist attack in Paris last month was another factor.

The party wants France to leave the European Union and strengthen security. It also wants immigrants and those seeking asylum to be removed from the country.

region – n. a part of a country or the world that is different or separate from other parts in some way

leftist – adj. belonging to or supporting the political left

round – n. one of a series of similar events

asylum – n. protection given by a government to someone who has left another country in order to escape being harmed