Update Required To play the media you will need to either update your browser to a recent version or update your Flash plugin.
By VOA
07 April, 2015


The United States Secretary of Defense is in Tokyo as part of a weeklong trip to the Asia-Pacific area. Ashton Carter aims to support allies Japan and Korea while restating the U.S. commitment to the so-called Asia-Pacific rebalance.

That policy seeks to place more political and military power to a fast-growing area. The U.S. and China are competing for influence among Asian nations. But Ashton Carter says that does not mean they are enemies.

"The U.S. and China are not allies, but we don't have to be adversaries."

Sheila Smith is the writer of the new book "Intimate Rivals: Japan's Domestic Politics in a Rising China." She says the Japanese and U.S. governments are seeking new guidelines on defense cooperation. She says Japan will want to center those guidelines on China's increased power. 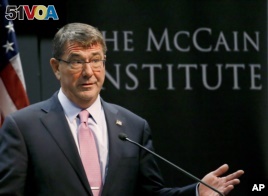 But she says the U.S. also has been watching China as it demonstrates its growing military power. She notes that the U.S. has 50,000 American troops on the ground in Japan.

Tensions between Japan and China have grown as the two argue over disputed islands in the East China Sea. Tensions over issues from World War II have also affected relations between the countries in recent years.

Defense officials say the new U.S.-Japan defense guidelines will include cooperation on space and cyber-security.

Writer Sheila Smith says the guidelines work well with the Japanese government's proposed new understanding of the country's constitution. That document has historically been understood as a rejection of the use of Japanese military action except in direct defense of the country.

"And that had been extended and been interpreted to say ‘we can't even use force to help the United States as it's helping us.'"

The new understanding would approve of "collective self-defense." This would permit Japan to act in alliance with the U.S. in the Pacific.

But wider military possibilities for Japan could raise concern for another U.S. ally: South Korea.

Ms. Smith says she believes Secretary Carter will make clear that the U.S.-Japan alliance is about the defense of Japan and will not interfere with the Korean peninsula.

Mr. Carter gave a speech before he left for the Asia trip. He spoke to students at the University of Arizona about the Trans-Pacific Partnership, a trade agreement with 11 other nations. Most of those nations are in Asia.

Secretary Carter called on Congress to pass a law that would permit President Obama to sign the Trans-Pacific Partnership. He said the Asia-Pacific will help define America's future. He noted that by 2050 the Asia Pacific area will hold half of the world's people. He said in just 15 years more than half the global middle-class population will live there. And he said regional defense spending is on the rise.

Mr. Carter told the students that guaranteeing peace, economic health and progress in the Asia-Pacific area will be their generation's central goal.

Secretary Carter said the trade agreement will help increase U.S. exports by a predicted $123 billion in the next ten years. He said it would be risky to not join the TPP. He said the U.S. could be denied access to the growing markets in the area.

VOA correspondents Carla Babb and Victor Beattie reported this story. Caty Weaver wrote it for VOA Learning English. Hai Do was the editor.

commitment – n. a promise to do something

middle class – n. a class that is between the upper class and the lower class and includes mainly business and professional people, government officials, and skilled workers