Update Required To play the media you will need to either update your browser to a recent version or update your Flash plugin.
By Mario Ritter
15 November, 2018


The head of Bangladesh's refugee commission announced on Thursday that plans to start sending Rohingya Muslims back to Myanmar has been cancelled.

An estimated 700,000 Rohingya are living in refugee camps in Bangladesh. But they are unwilling to return to Myanmar, officials said.

Refugee Commissioner Abul Kalam told the Associated Press that officials "can't force them to go." But he said officials will continue to try to persuade the refugees to leave.

The announcement came after about 1,000 Rohingya demonstrated against returning to Myanmar.

Another Bangladeshi official went to the Unchiprang camp, near the city of Cox's Bazar. It is one of the largest refugee settlements in Bangladesh.

The official spoke to the refugees over a loudspeaker. He said "we have arranged everything for you, we have six buses here, we have trucks, we have food. We want to offer everything to you. If you agree to go, we'll take you to the border, to the transit camp."

However, hundreds of refugees refused the offer. 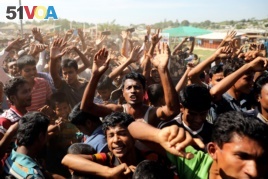 Hundreds of Rohingya refugees shout slogans as they protest against their repatriation at the Unchiprang camp in Teknaf, Bangladesh

Bangladesh had attempted to start the return of the refugees to Myanmar, although United Nations officials had said they should wait. A U.N. negotiated deal with Bangladesh and Myanmar states that the Rohingya cannot be forced to return.

The countries had planned to send a first group of 2,251 people back in the middle of November, followed by about 150 each day after that.

Large numbers of Rohingya started fleeing Myanmar in August of 2017. That was when security forces launched a campaign against the group after rebels attacked guard stations.

The size and violence of the operation caused many nations and U.N. officials to accuse Myanmar of ethnic cleansing and genocide.

Myanmar has a Buddhist majority. Most people there do not accept the Rohingya as a native ethnic group. They are considered "Bengalis" who illegally entered the country from Bangladesh. Most Rohingya are Muslim.

Almost all Rohingya in Myanmar have been denied citizenship. They are unable to attend schools or get medical care.

Human rights activists say it is not yet safe for the refugees to return.

Bill Frelick is with the New York City-based group Human Rights Watch. He said in a statement that "nothing the Myanmar government has said or done suggests that the Rohingya will be safe upon return."

The group said 150 people from 30 families were to be sent to a transit camp on Thursday, but the camp was empty except for security guards.

Bangladeshi officials said they have been working with the United Nations on a list of those who want to return to Myanmar.

At the Jamtoli refugee camp, 25-year-old Setara said she and her two children, age four and seven, were on a return list, but her parents were not. She said she never asked to return to Myanmar.

"They killed my husband; now I live here with my parents," she said. "I don't want to go back."

Setara said others who were named on the government's list had fled to other camps in hopes of disappearing.

Earlier plans to start sending the refugees back to Myanmar last January also were called off because of reports of continuing violence.

Julhas Alam reported this story for the Associated Press. Mario Ritter adapted it for VOA Learning English. George Grow was the editor.

arrange –v. to organize the details of something before it happens

transit –adj. related to the act of moving people or things from one place to another