Bats and the Origins of Outbreaks

Update Required To play the media you will need to either update your browser to a recent version or update your Flash plugin.
By Jonathan Evans
07 March 2021


Scientists have long suspected that the rate of new infectious diseases could speed up. This is especially possible in developing countries where human and animal contact is increasing.

Changes in the environment are moving many species of animals into new living spaces.

Those movements, combined with more human contact with animals as people move deeper into forests, increases the chances of a virus jumping species.

Diseases that can jump from animals to humans are called zoonotic diseases. These diseases can be problematic because the human body is not designed to defend against this kind of invasion.

The host animal species often shows no signs of disease. This is because the animal's body has already learned to deal with the virus. However, when such viruses or other disease-causing microorganisms jump from animals to humans, the effects can be deadly.

Many scientists believe bats were the first carriers of the coronavirus that causes COVID-19. The animals have been linked to past outbreaks of coronaviruses in humans. Studies have shown that bats are natural hosts to many other viruses as well. 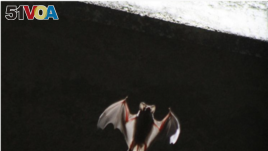 FILE PHOTO: One of some 1.5 million bats emerges from below the Congress Street Bridge near downtown Austin, Texas July 27, 2011, as they do every night in the summer, looking for food. REUTERS/Charlie L. Harper/Files

One example is the Ebola virus, which caused deadly outbreaks in Western Africa. The Nipah virus, also carried by bats, has caused human outbreaks across South and Southeast Asia. Health experts say Nipah is serious enough to possibly cause a "serious epidemic."

The coronavirus family of viruses also includes diseases such as Severe Acute Respiratory Syndrome (SARS) and Middle East Respiratory Syndrome (MERS). Scientists have discovered that SARS and MERS were caused by viruses that started in bats, with other animals serving as intermediate hosts.

The only other animals coming close to hosting as many viruses as bats are rodents. There are about 2,300 species of rodents, making up about 40 percent of all mammals. While rodents are believed to have more viruses as a group, bats host more viruses per species.

Scientists believe the many types of species in both groups can create more possibilities for viruses.

Some bats live in forests while others are found in caves. Most eat insects such as beetles, moths and mosquitoes. Some bats eat fruit, nectar, seeds and pollen from flowers. Others eat small animals such as birds, fish, frogs and lizards. A small number of bats feed on blood.

Bats also provide many benefits to the environment. Some bats play important parts in plant pollination and spreading seeds. Bats can pollinate more than 500 species of plants including avocados, bananas, dates and mangoes.

In Southeast Asia, durian, a highly valued fruit, can be effectively pollinated only by the Dawn Bat. In this way, bats are important economically for people.

Insect-eating bats also serve to naturally control insect populations. These bats eat millions of insects at night, including some that cause severe damage to crops.

Julia Janicki and Simon Scarr reported on this story for the Reuters news service. Jonathan Evans adapted this story for Learning English. Bryan Lynn was the editor.

host – n. a living organism on or in which a parasite lives

intermediate host – adj. a host which is normally used by a parasite in the course of its life cycle and in which it may multiply asexually but not sexually

mammals – n. a type of animal that feeds milk to its young and that usually has hair or fur covering most of its skin

pollen – n. the very fine usually yellow dust that is produced by a plant and that is carried to other plants of the same kind usually by wind or insects so that the plants can produce seeds