Belarusian Sprinter Says She Defected on Family Fears about Safety

Update Required To play the media you will need to either update your browser to a recent version or update your Flash plugin.
By Dan Novak
05 August 2021


Belarusian Olympic runner Krystsina Tsimanouskaya decided to defect as she was being driven to a Tokyo airport. She made the choice because her grandmother told her it was not safe for her to return home.

Tsimanouskaya arrived in Poland on Wednesday. She spoke to reporters about the events that led her from Tokyo to Warsaw.

Problems started when Tsimanouskaya published a message on social media criticizing how her Olympic team was being overseen. Team officials then told her she had to leave the team -- and leave Japan. They told her to say she was injured and needed to go home early.

When Tsimanouskaya arrived at the airport, she asked for help from the police. She translated a message on her phone into Japanese and showed it to them.

When it became clear she was in trouble, European countries offered to help her. The runner later went to the Polish embassy in Tokyo, where she received a humanitarian visa. Many of Belarus' activists have gone to Poland to avoid punishment from President Alexander Lukashenko's government.

"I'm a sportsperson and I didn't understand anything in political life," Tsimanouskaya told Reuters. "I try not to do anything other than a sport in my life and I try my best to not be distracted by politics." 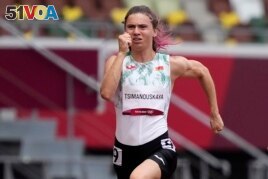 Still, she said she was concerned for the safety of her family back home. Her husband fled Belarus this week shortly after his wife said she would not be returning. Poland also gave him a visa.

The events have drawn more attention to Belarus' authoritarian government. Lukashenko won a sixth term last year in an election widely seen as dishonest. After months of protests, the government answered with violence and the arrests of tens of thousands of demonstrators. The government has also targeted the media and members of the political opposition.

The Belarus National Olympic Committee had said trainers removed Tsimanouskaya from the Games because doctors said she was in bad physical and mental health. The committee did not answer requests for comment by Reuters on Thursday.

Tsimanouskaya wrote on social media that team officials put her in the 4x400 meter relay race, an event she had never competed in.

She said she told her coach on Sunday that she was ready to run in the 200 meters. The coach then went to make a telephone call.

In a "couple of hours the head coach came to me with the team representative and they said there was a decision made to send me home," she told Reuters reporters. They said, "we are not the ones who made the decision, we are only executing it. You have 40 minutes. You have to pack your things and go to the airport."

The decision, she said, came from "high up."

Tsimanouskaya's criticism was aimed at team officials. But it likely angered political officials. Lukashenko led the Belarus National Olympic Committee for almost 25 years before giving his son the job in February. Lukashenko takes a serious interest in sports and sees sports as a sign of national honor.

The 24-year-old Tsimanouskaya said Thursday she had not thought about seeking political asylum. But she said she hoped to find a way to continue her running career. She said she hopes the Tokyo Games are not her last Olympics.

She also said she wants to go back home one day, when it is safe.

"I would want to return to Belarus," Tsimaounskaya said. "I love my country. I did not betray it and I hope I will be able to return."

Dan Novak adapted this story for VOA Learning English based on reports from The Associated Press and Reuters. Ashley Thompson was the editor.

defect — v. to leave a country, political party, organization, etc., and go to a different one that is a competitor or an enemy

translate — v. to change words from one language into another language

visa — n. an official mark or stamp on a passport that allows someone to enter or leave a country usually for a particular reason

distracted — adj. unable to think about or pay attention to something : unable to concentrate

coach — n. a person who teaches and trains an athlete or performer

execute — v. to do (something that you have planned to do or been told to do)

betray — v. to hurt (someone who trusts you, such as a friend or relative) by not giving help or by doing something morally wrong