Update Required To play the media you will need to either update your browser to a recent version or update your Flash plugin.
By Susan Shand
14 January 2021


President-elect Joe Biden is proposing a coronavirus action plan that centers on mass vaccination in the United States and more financial assistance to help the economy. The plan could cost as much as $1.9 trillion dollars.

Biden sees the pandemic as the country's biggest problem. He said last week, "That's my No. 1 concern, to get the virus under control."

The plan aims to speed up vaccination of Americans by delivering more vaccine and working closely with states and local communities to get shots into the arms of more people. 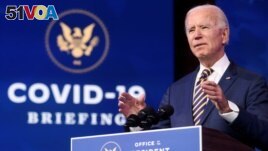 Biden has set a goal of giving out 100 million shots in his first 100 days. Right now, the U.S. is vaccinating almost one million people a day, but it needs to get up to two million to reach Biden's goal.

Biden has said the plan would have "billions of dollars" to speed up vaccination. He is also asking Americans to look past their sense of pandemic fatigue. He wants a commitment to wearing masks, practicing social distancing, and avoiding large indoor gatherings.

The president-elect wants Congress to send more money to American states to help reopen schools and to avoid laying off teachers, police officers and health workers.

Biden's incoming White House economic adviser, Brian Deese, told Reuters the measures may include direct payments of $1,400 to most Americans.

The plan comes as a divided nation is experiencing the pandemic's most dangerous wave yet. So far, more than 380,000 Americans have died.

Biden hopes his plan will put the country on the path to recovery by the end of his first 100 days. "It's going to be hard," Biden said Monday after he got his second vaccine dose. "It's not going to be easy. But we can get it done."

But the biggest question for Biden is if he can "win the hearts and minds of the American people to follow his lead," said Dr. Leana Wen. She is a public health expert and emergency physician.

Under the Trump administration, more than 29 million doses of vaccine have been sent but only 10.3 million have gotten the first of two shots.

Biden wants to quickly increase that number by working closely with states and local communities to get more people vaccinated.

It will need cooperation "at all levels, as well as resources," said Dr. Nadine Gracia. She is the executive vice president of the nonpartisan Trust for America's Health.

Experts say, however, that the biggest problem may be public suspicion about the vaccine. Research shows it is a big problem, especially among Black Americans.

The Associated Press and the Reuters News Agency reported this story. Susan Shand adapted it for Learning English. Hai Do was the editor.

dose – n. the correct amount of medication to be taken at one time

confidence – n. a feeling of trust and certainty