Update Required To play the media you will need to either update your browser to a recent version or update your Flash plugin.
By John Russell
04 October 2020


At the Pyramids of Giza, a few tourists walk among Egypt's ancient wonders. At Red Sea resorts, visitor numbers are well below what they were in earlier years.

Coronavirus cases in Egypt remain under control. But, officials, hotel owners and tour guides agree that the tourism season, starting in October, is going to be difficult.

That could be bad news for the economy. Tourism makes up to around 15 percent of Egypt's economy. Officials said the economy was losing around $1 billion each month after tourism mostly stopped in March.

Since July 1, 220,000 tourists have visited the Red Sea province and South Sinai, which is home to the Sharm el-Sheikh resort. That number represents less than 10 percent of last year's levels, said Ghada Shalaby, a deputy minister at the Ministry of Tourism and Antiquities. 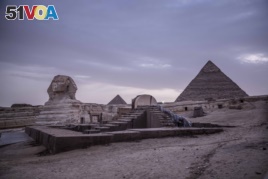 This March 30, 2020 photo, shows the empty Giza Pyramids and Sphinx complex on lockdown due to the coronavirus outbreak in Egypt.

Egypt has asked the International Monetary Fund (IMF) for $8 billion in new loans this year.

Samir is a trader who has been working at the pyramids south of Cairo for around 30 years.

"We used to see about 50 buses here. Now there are none," he said. He has been selling his possessions to pay for his son's school fees.

"We only had one bus, a week ago, full of Russians. They took some photos and left."

Westerners often come to see Egypt's historic sites and golden sands between October and May. They want to avoid the cold at home and the heat of Egypt's summer.

Shalaby said visitors are slowly returning to the resorts by the sea. But Shalaby said that safety was more important than increasing tourism numbers.

Nile cruises will likely begin in October, but it is unlikely that bookings will pick up without a return of charter flights.

"We hope that next year tourism will be working," said Tharwat Agamy of the Egyptian Travel Agents Association.

The Egyptian government has moved to protect the tourism industry with emergency financing. More than 9,000 tour guides will receive $32 monthly until the end of the year.

Officially recorded daily coronavirus cases have fallen to under 200 from about 1,500 in the middle of June.

Officials say the places that tourists visit and hotels are subject to controls. Those entering the country are required to take PCR tests, a special kind of medical test. But the European Union has not added Egypt to its safe travel list.

At Cairo's Khan al Khalili market, a popular place for tourists, many stores are closed.

"There is no one," said Sayed Abdel Khaleq, a silver shop owner.

Mahmoud Mourad, Nadeen Ebrahim reported on this story for Reuters. John Russell adapted it for Learning English. Mario Ritter, Jr. was the editor.

cruise – n. to travel on a boat or ship to a number of places as a vacation

fee – n. an amount of money that must be paid

photo – n. an image made from a camera

booking – n. an arrangement to have something (such as a room, seat, or place) held for your use at a later time

charter – adj. hired for temporary use