Update Required To play the media you will need to either update your browser to a recent version or update your Flash plugin.
By Bryan Lynn
25 July 2020


Vietnam has reported big success in limiting the spread of COVID-19 inside the country. But the worldwide pandemic has left nearly 1 million Vietnamese unemployed.

About 900,000 people are currently unemployed. Another 18 million are underemployed. Those numbers come from the country's General Statistics Office report for the first half of 2020. 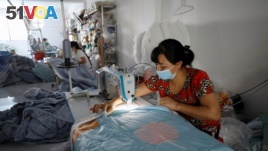 Laborers wear protective masks as they work at a private Ngoc Nu factory which makes blankets, pillows and mattresses for the local market, in Hanoi, June 1, 2020

The record jobless rate comes even though Vietnam is the most populous nation in the world to report zero COVID-19 deaths. Vietnam is also one of the few countries worldwide to see its economy grow this year.

Experts say the huge job losses were mainly caused by the shrinking demand for its products from nations hit hard by the virus.

The most affected areas have been in Vietnam's cities. In the second quarter of 2020, unemployment in cities hit a 10-year high of 4.46 percent. During the same period two years earlier, the unemployment rate in cities was 3.09 percent.

The rise also marks a change from the first quarter of 2020, when the International Labor Organization office in Hanoi said employment levels "remained unaffected by the crisis" of COVID-19.

"The complicated and unpredictable COVID-19 pandemic caused growth in most industries and sectors to slow down," the General Statistics Office said in a statement. "Unemployment and underemployment have increased greatly."

Such high jobless numbers are almost unheard of in Vietnam. The country historically reports continually rising trade growth, which fuels major factory and construction activity across the country.

In answer to COVID-19, the country introduced a $2.7 billion relief fund that includes aid to workers.

Vietnam is in the process of approving labor unions independent of the Communist Party. The move is part of a promise related to a new European Union trade deal.

Vietnam depends heavily on exports to drive its economy, especially to the United States and the European Union. But consumer demand in both places dropped as the pandemic grew.

However, there is still more investment going to Vietnam compared to most other nations.

More Vietnamese are flying within the country compared to last year. The increase has come following a campaign to replace the loss of foreign visitors with local travelers. And, hotels like the Anam on Vietnam's south-central coast say they have increased anti-virus safety measures to help bring more local visitors.

Bryan Lynn adapted this story for VOA Learning English based on a report from VOA News. Ashley Thompson was the editor.

pandemic – n. an occurrence in which a disease spreads very quickly and affects a large number of people

sector – n. one part of a country's economy

relief – n. help given to people in need

fund – n. an amount of money collected for a particular purpose

replace – v. to use instead of something else