Millions Unemployed as Coronavirus Pulls US Economy Down

Update Required To play the media you will need to either update your browser to a recent version or update your Flash plugin.
By Susan Shand
23 April 2020


Editor's Note: Late Thursday, the U.S. House of Representatives passed an additional $484-billion aid bill already approved by the Senate. The legislation now goes to the president to be signed into law.

About 26.5 million jobless Americans have asked the government for financial assistance over the last five weeks. The number confirms that all the job gains in the United States over the past 10 years have been lost during the coronavirus pandemic.

The rising levels of unemployment provide evidence for economists' claims that the U.S. economy entered recession in March. They also point to a collapse in retail and home sales, manufacturing production and homebuilding.

As the economic slowdown deepens, some Americans are protesting nationwide measures to control the spread of COVID-19, the disease caused by the virus. President Donald Trump is worried and wants to restart the economy as soon as possible. He is seeking a second term in elections later this year. 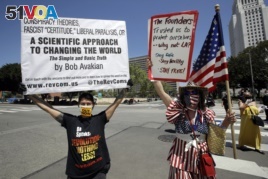 On Wednesday, Trump praised decisions made by some states to begin reopening their economies. Those states are governed by members of his Republican Party. U.S. health experts have warned of a possible increase in infections if areas reopen before the disease is under control.

The labor market is pushing into "new territory," notes Daniel Zhao, an economist with Glassdoor, a company that helps jobseekers. He added that the unemployment rate is already greater than the during the Great Recession .

The federal government reported Thursday that in the week ending April 18, more than 4.4 million unemployed Americans sought benefits from the government. Since March 21, over 26 million people have asked for government assistance. That represents 16.2 percent of the work force.

The U.S. economy created 22 million jobs between September 2010 and February 2020. That represents the longest increase in job growth in U.S. history.

The Labor Department said the high numbers of unemployed were because of "the COVID-19 virus."

Economists are saying as many as 25 million jobs were lost in April, which was the largest decrease in 11 years.

Is the worst over?

Although the number of Americans seeking unemployment benefits is high, it is decreasing. The number appeared to have reached a peak -- a record 6.867 million -- in the week ending March 28.

Job losses are likely "to continue across a number of industries in coming weeks, said Andrew Hollenhorst, an economist at Citigroup in New York.

The decrease in unemployment claims is partly a result of congressional legislation. Under a $2.3 trillion program, small businesses are offered loans that could be partially forgiven if they are used to pay their workers.

The U.S. Senate on Tuesday approved $484 billion in additional aid. If it becomes law, the measure would mostly expand loans for small businesses.

The government aid is designed to prevent additional unemployment.

Economists will continue to study the number of Americans who asked the government for jobless benefits. This number is considered a truer picture of total unemployment nationwide. In the week ending April 11, the number was nearly 16 million.

Economists believe the unemployment rate this month will be the highest since the end of World War II. The old record -- of 10.8 percent – was set in November 1982. The April totals will not, however, come near the 25 percent unemployment rate in 1933 during the Great Depression.

benefit – n. something that helps someone

retail – adj. available to be purchased in a store

pandemic – n. a contagious illness that crosses into other countries