Black Men Arrested in Starbucks Call for Action, Not Anger

Update Required To play the media you will need to either update your browser to a recent version or update your Flash plugin.
By Bryan Lynn
19 April, 2018


Two black men arrested in an American Starbucks store say they are working with the company to bring about meaningful changes. They hope the changes will prevent other people from going through the same experience.

The two men spoke to reporters Thursday for the first time since the April 12 incident at a Starbucks in Philadelphia, Pennsylvania. Police arrested the men, walked them out of the store and took them to jail.

The 23-year-old men – Rashon Nelson and Donte Robinson – told the Associated Press they did nothing wrong. Part of the incident was captured on video by another person inside the Starbucks. The video was published on Twitter. It has more than 11 million views.

The video caused anger on social media. Many people criticized the arrests as an example of racial discrimination and racial profiling. People protested at Starbucks stores across the country. Some groups called for a boycott of the company.

Police say a Starbucks manager called them. The manager reported the two men were sitting at a table in the store but were not buying anything. The manager asked them to leave. They refused. They explained to the manager that they were waiting for someone else to arrive to have a business meeting there.

Nelson has also said the manager told him he could not use the store's bathroom because he had not bought anything.

The two men – who are best friends and business partners – say they were surprised when police showed up. The officers asked them to leave the store, but they again refused. They told the officers they had done nothing wrong. 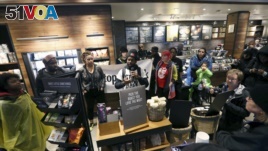 Demonstrators occupy the Starbucks that has become the center of protests Monday, April 16, 2018, in Philadelphia. (AP Photo/Jacqueline Larma)

"We were there for a real reason, a real deal that we were working on," Robinson told the Associated Press of the planned business meeting that never happened. "We put in a lot of time, energy, effort."

As he was taken to jail, Robinson said he thought about his loved ones and how his day had quickly taken an unexpected turn.

Nelson said he even wondered about the possibility of not making it home alive. "Anytime I'm encountered by cops, I can honestly say it's a thought that runs through my mind," he said. "You never know what's going to happen."

In the video, the men show no physical resistance to arrest. At least two witnesses in the video can be heard saying they did not see the men do anything that would be cause for the arrests.

Philadelphia's mayor, Jim Kenney, said what happened at the Starbucks "appears to exemplify what racial discrimination looks like in 2018." Kenney is white and a member of the Democratic Party.

Philadelphia Police Commissioner Richard Ross, who is black, first said in a Facebook post days after the incident that the officers "had legal standing" to make the arrests. He said that his officers "did absolutely nothing wrong" and had followed all police department policies.

But on Thursday, Ross said he should have said the officers "acted within the scope of the law, and not that they didn't do anything wrong."

At a news conference, Ross said he had "failed miserably" in his earlier comments about the arrests. He also said the police department did not have a clear policy before for dealing with such situations. He said a new policy will be released soon. 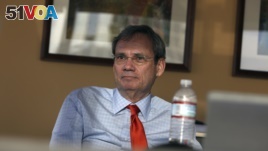 In this Wednesday, April 18, 2018 photo, Stewart Cohen, an attorney representing Rashon Nelson and Donte Robinson, said the men were illegally profiled during an interview with The Associated Press in Philadelphia. (AP Photo/Jacqueline Larma)

Nelson and Robinson were released from jail later that night after Starbucks decided not to press charges for trespassing.

A lawyer working for the two men accused police of illegally profiling them. He said such profiling violates the Civil Rights Act of 1964, which bans discrimination based on race in hotels, restaurants, theaters and other public places.

The Starbucks company has said the location where the arrests took place has a policy that restrooms are to be used only by people who have bought something.

Starbucks chief Kevin Johnson offered in a statement the company's "deepest apologies" to the two men. He said the incident had resulted in a "reprehensible outcome."

Johnson said the company is fully investigating the incident and promised to make any needed policy changes to prevent the situation from happening again. In his statement, Johnson said, "Starbucks stands firmly against discrimination or racial profiling."

Johnson also met with Nelson and Robinson. The two men say they are in ongoing discussions with Starbucks to push for changes at the company.

Among the changes they are proposing is the posting in stores of a customer bill of rights. They also want Starbucks to create new policies on customer removals. In addition, they have called for independent investigations into accusations of racial profiling and racial discrimination from customers and employees.

Robinson said he welcomes the public support he and his friend have received. But he added that he does not believe that anger and boycotts of Starbucks will truly solve the problem.

"We need a different type of action... not words," Robinson said. "It's a time to pay attention and understand what's really going on. We do want a seat at the table," he added.

racial profiling – v. to form an opinion about a person based on their skin color or ethnic background

encounter – v. to meet someone without expecting or intending

scope – n. the area that is included in or dealt with by something

exemplify – v. to be or give a typical example of something

trespass – v. to go or remain on someone's land

a seat at the table – expression. a position as a member of a group that makes decisions