Update Required To play the media you will need to either update your browser to a recent version or update your Flash plugin.
By Susan Shand
23 February 2020


A university in the American state of Utah made news recently when it changed the school's code of conduct. Brigham Young University amended its rules to remove a rule that banned any behavior that related to "homosexual feelings."

LGBTQ students and their supporters claimed the rule was unfair since it was not required of heterosexual couples. The term LGBTQ is short for Lesbian, Gay, Bisexual and Transgender.

Brigham Young University (BYU) belongs to The Church of Jesus Christ of Latter-day Saints. The church teaches its members that being gay is not wrong, but having a sexual relationship with a person of the same sex is. 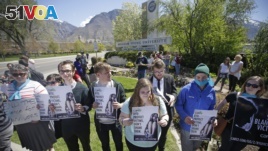 Protesters stand in solidarity with rape victims on the campus of Brigham Young University during a sexual assault awareness demonstration, in Provo, Utah.

BYU's changes to what the university calls its honor code does not change the religious group's opposition to same-sex relationships or gay marriage.

A BYU official said an email that the new version of the code of conduct is very much like a new handbook of rules released by the church. She said the changes removed "prescriptive language" and kept the values "of the Honor Code, which have not changed."

The church has tried to become more understanding in its relationship to LGBTQ people in recent years.

A part of the code that dealt with "homosexual behavior" has been removed. The language that angered people was the part that said any form of physical activity "that gives expression to homosexual feelings" were banned.

In the past, students criticized language that barred gay couples from holding hands, which is permitted for heterosexual couples. The university bans all sex before marriage for all students.

Former BYU student Addison Jenkins had asked for years for university officials to remove the language. He said he is pleased the words are removed.

Jenkins said he still has some worries about how officials will enforce the new code. BYU officials released several tweets about what they called some "miscommunication" about what the changes mean.

The university's Honor Code bans some things that are commonplace at other U.S. colleges. They include drinking alcohol, men's beards and any body piercings. Students who attend BYU, in Provo, Utah, agree to follow the code. Nearly all students are members of the Church.

Last year, several hundred students urged BYU officials to be more understanding in the way students were punished for breaking some of the rules.

code of conduct– n.a set of rules that establishes what is and what is not acceptable behavior

homosexual–n.someone who has a sexual desire for people of the same sex

heterosexual –n.someone who has a sexual desire for people of the opposite sex

couple– n.two people who are married or in a close relationship

lesbian– n.a woman who has sexual desires only for women

gay – n. someone who has a sexual desire only for people of the same sex

transgender– adj.of or related to a person whose gender differs from the sex the person had at birth

pierce– v.to cut a hole in the body to wear earrings or other jewelry