Update Required To play the media you will need to either update your browser to a recent version or update your Flash plugin.
By Caty Weaver
14 October, 2012

Welcome to THIS IS AMERICA in VOA Special English. I'm Faith Lapidus. This week on our program -- the music of Chuck Berry. The man often called the "father of rock and roll" will be eighty-six this week and is still performing.

Another music great, Smokey Robinson, has described Chuck Berry as "the inspiration for all of today's rock 'n' roll guitarists." And, Anthony Kiedis from the Red Hot Chili Peppers calls him "a musical scientist who discovered a cure for the blues."

One of Chuck Berry's first releases was "Brown Eyed Handsome Man." The last verse goes like this:

The song came out in nineteen fifty-six, less than ten years after major league baseball began to accept black players. The first was Jackie Robinson.

Rob Sheffield at Rolling Stone magazine wrote about baseball songs on his blog and had this to say: "The guitar speeds up as Chuck Berry heads into the climactic final verse, when that brown-eyed handsome man (Willie Mays? Hank Aaron? Jackie Robinson?) wins the game with a home run. Chuck would've made a lousy sportscaster ('two-three the count'?) but that just adds to the excitement."

On stage, he became known for his wild performances, and his "duck walk" that many musicians copied. But his songwriting skills -- some call him a rock and roll poet -- and his guitar work really set him apart. 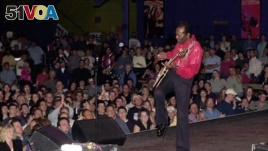 Chuck Berry performs at the Pageant Theater in St. Louis, Missouri, on October 18, 2001, for his 75th birthday celebration
Early in his career he played mostly blues for black audiences in clubs in St. Louis, Missouri. But the most popular music in the area was country. So this musical scientist mixed country and blues and got songs like "Maybellene."

Chuck Berry was born on October eighteenth, nineteen twenty-six, in St. Louis, where he still lives. His mother, Martha, was a high school principal. His father, Henry, worked with wood; he was a carpenter.

Charles Edward Anthony Berry was born the fourth of six children. He started singing in church when he was six years old. His interest in music stuck with him.

A lot of Chuck Berry's material is about teenage life, especially school.

Chuck Berry left school when he was seventeen. He headed west with two friends, but they did not get far. They were arrested after they used a gun to steal a car in Kansas City, Missouri.

He was released from prison after four years when he reached the age of twenty-one. But that would not be the last of his legal problems over the years.

Chuck Berry signed his first recording contract in nineteen fifty-five, with Chess Records. One of his early hits was "Rock & Roll Music."

That song also became a hit with other bands, including a certain well-known British group.

Chuck Berry started performing around the country in nineteen fifty-seven. Many years later, his tradition of asking to be paid before concerts even earned a part in the lighthearted crime film "Ocean's Thirteen."

BASHER TARR: "Pay me my money!"

Filmmaker Taylor Hackford made a documentary called "Hail! Hail! Rock 'n' Roll," named for a Chuck Berry song. It centered on the making of a concert to honor the musician on his sixtieth birthday in nineteen eighty-six.

Guitarist Keith Richards from the Rolling Stones organized the concert. Listening to Chuck Berry songs got him interested in music. In Keith Richards' words, "I didn't dream I could make a living at it but that's what I wanted to do."

Some of the best moments in "Hail! Hail! Rock 'n' Roll" are between Keith Richards and Chuck Berry. 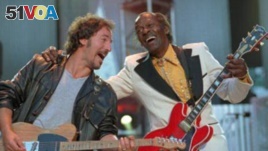 Bruce Springsteen and Chuck Berry during the performance of "Johnny B. Goode" at a concert for the Rock and Roll Hall of Fame in Cleveland, Ohio, in 1995

More than seventy-five artists and bands have done their own versions of Chuck Berry songs. Many have done several, including the Rolling Stones, Elvis Presley, Conway Twitty and Bruce Springsteen.

Here are George Thorogood and the Destroyers with "It Wasn't Me."

The Rock and Roll Hall of Fame in Cleveland, Ohio, included Chuck Berry in its first year of honors in nineteen eighty-six. The Hall of Fame had this to say: "While no individual can be said to have invented rock and roll, Chuck Berry comes the closest of any single figure to being the one who put all the essential pieces together."

Our program was written and produced by Caty Weaver. Tell us your favorite Chuck Berry song. Go to 51voa.com or the VOA Learning English page on Facebook. On our site you can also download MP3s of our programs and read the transcripts. I'm Faith Lapidus.

And I'm Doug Johnson. Join us again next week for THIS IS AMERICA in VOA Special English.