How to Win a Debate, Presidential or Otherwise

Update Required To play the media you will need to either update your browser to a recent version or update your Flash plugin.
By VOA
02 October, 2012

President Obama and former governor Mitt Romney have teams of advisors and aides to help them prepare for their three debates. But what about the rest of us who would like some help winning an argument -- at work, at school or at home?

For advice, we asked two experts at Wake Forest University in Winston-Salem, North Carolina. Allan Louden chairs the Department of Communication. Assistant professor Jarrod Atchison is the director of debate. His first piece of advice is to know your audience.

JARROD ATCHISON: "Before you know if you've won or lost, you have to know who the audience is or who the judge is. And so in everyday argumentation some people think that logic alone will prevail when sometimes that's not the most persuasive form of argument in a given situation. So you have to know your audience and what they consider to be relevant information for the debate at hand."

Second, find a "universal principle" that everyone in the room -- from the audience members to your opponent -- can agree to. Mr. Atchison says if you argue from that principle, "then you don't have to fight the fight about the basics of the evidence."

Third, he says the best debaters are the best listeners. They listen to what their opponent is saying, instead of just repeating their own position. 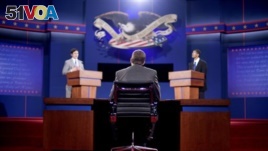 Stand-ins for moderator Jim Lehrer, center, Republican candidate Mitt Romney and President Barack Obama at a rehearsal for the first presidential debate on Wednesday at the University of Denver in Colorado

JARROD ATCHISON: "Where people tend to get in trouble is they try to use phrases like 'always' and 'never,' and we find these in our relational arguments as well, that nothing draws the ire of an audience than an overstated claim. Because then all the other person has to do is to make a little bit more nuanced argument about where under certain conditions a particular argument or Plan A makes sense versus Plan B. So one of the major mistakes people make is they try to think that they're arguing in absolutes to sound more persuasive, when in actuality it comes across as too ideological and not nuanced enough."

Professor Alllan Louden says debaters should be careful not to underestimate their audience's ability to follow the arguments.

ALLAN LOUDEN: "They're kind of assuming the first-time audience that doesn't know much, and they tend to pander, when in fact if you were to step it up a notch and actually say what your position was and defend it with support, etcetera, that would be well-received."

In the end, he says, people have to make up their mind for themselves.

ALLAN LOUDEN: "Ultimately, everybody persuades themselves, and the best message is that which solicits the person to whatever part of their cognitive makeup says that this is a good idea. Typically people see things from a point of view, so you pick a language which is in their language and you argue from a perspective which says 'This is to your advantage because,' things that they kind of agree with. People ultimately persuade themselves."

So what should you do if you feel like you are losing an argument? Jarrod Atchison says the first thing to do is to be willing to recognize what parts of your opponent's arguments are persuasive.

JARROD ATCHISON: "The best debaters in the country, from an academic perspective and in our daily lives, are the people that can acknowledge what parts of their opponent's arguments are correct, make sense, are persuasive -- 'however,' and then provide a warrant after the however that explains why their position is still more persuasive in the end."

Professor Atchison says everyone can improve their argumentation skills. There are lots of books that people can read.

JARROD ATCHISON: "But in my experience the best resource is evaluating your own arguments in action. And that can be something as self-reflective as sitting back and asking yourself, 'How did that conversation go? Was it where I wanted it to end up? Were there moments when I found myself acting reactionary rather than conceding that my opponent may have had something to say there?'

Another thing that can help, he says, is to use a method of debate training known as switch-side debating.

JARROD ATCHISON: "And that's where you basically stake a position and then argue from the opposite side. And if the better you are at being able to articulate the argument against your position, it will teach you both the skills of empathy, to learn that the other side might not be just as crazy as you think, but also to critique your own arguments by knowing the strengths and weaknesses of your opponent's position."

That was Jarrod Atchison, director of debate at Wake Forest University in North Carolina. Oh, and one more thing. He tells us that his wife is one of the top debaters in the country. So we wondered what the conversations are like around the dinner table.

JARROD ATCHISON: "Well, the best debaters know what arguments are worthy to argue about, and so we find that oftentimes we don't have as many arguments as our peers because we know what the nuclear option looks like."

Tell us about your own experience with debate and everyday argumentation. Share your comments and advice at the VOA Learning English page on Facebook. I'm Avi Arditti.
___