Update Required To play the media you will need to either update your browser to a recent version or update your Flash plugin.
By VOA
01 October, 2012

This is SCIENCE IN THE NEWS, in VOA Special English. I'm Barbara Klein.

A storm named Isaac recently brought death and destruction to the United States and islands in the Atlantic and Caribbean Sea. Wide, slow-moving Isaac came to life over waters near the island of Puerto Rico. At the time, the storm was not yet a hurricane. Instead, it was called a tropical depression. Then it grew in strength and size, was declared a tropical storm, and stayed that way for days. 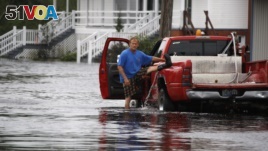 A Mississippi man lifts his left leg to remove water from his boot after wading through Isaac's flood waters
Isaac passed over Haiti, killing at least twenty-nine people. Five people were confirmed dead from the storm in the Dominican Republic.

Weather experts finally declared Isaac a hurricane as it moved toward the southern United States. Parts of Louisiana were still recovering from Hurricane Katrina, a powerful storm seven years earlier.

Isaac's strong winds and rains cut electricity to nine hundred thousand homes and businesses in the state. Damage to agriculture was estimated in the millions of dollars. The storm also struck hard in Mississippi, Arkansas and other states.

The city of New Orleans largely escaped severe damage. But areas near it, like Plaquemines Parish, suffered huge floods. Plaquemines is on a piece of land shaped like a finger. It runs along the Mississippi River into the Gulf of Mexico. That is where Isaac – and Katrina before it -- made landfall. Plaquemines also suffered major damage during Katrina.

Isaac caused a number of tornadoes, powerful wind storms, in states as far away as Illinois and Missouri. By the time it was over, nine people were reported dead in the United States.

How did Isaac get its name? Naming storms and other natural events has been a tradition for centuries. For example, the name "Thor" was given to the mythical Norse god of thunder, the loud sound that follows lightning in the sky.

An Australian scientist began calling storms by women's names before the end of the nineteenth century. During World War Two, scientists called storms by the names of their wives or girlfriends.

American weather experts started to use women's names for storms in nineteen fifty-three. In nineteen seventy-nine, they began to use men's names, too.

Scientists choose the names of storms many years before they are used. They decide on them at meetings of the World Meteorological Organization. The National Hurricane Center in Miami, Florida has one list for each of six years for Atlantic storms. Its experts name storms when they reach wind speeds of sixty-two kilometers an hour. That is true even if they never grow stronger.

The first name used in a storm season begins with the letter A. The second begins with B and so on. The letters Q, V, X, Y and Z are never used. And the same list of names is not used again for at least six years. And different lists are used for different parts of the world. A name is retired when the storm with this name has been very destructive, like Hurricane Katrina in two thousand five.

That same year, Greek letters had to be used for the first time to name storms in the Atlantic. That was the plan -- to call storms Alpha, Beta and so on -- if there were ever more than twenty-one named storms in a season. As it happened, there were twenty-eight.

Ocean storms develop when the air temperature in one area is different from the temperature nearby. Warmer air rises, while cooler air falls. These movements create a difference in atmospheric pressure.

If the pressure changes over a large area, winds start to blow in a huge circle. High-pressure air is pulled toward a low-pressure center. Thick clouds form and heavy rains fall as the storm gains speed and moves over the ocean. Storms can get stronger as they move over warm ocean waters.

The strongest, fastest winds of a hurricane blow in the area known as the eyewall. It surrounds the center, or eye, of the storm. The eye itself is calm by comparison.

These storms also cause high waves and ocean surges. A surge is a continuous movement of water that may reach as high as six meters or more. The water strikes low coastal areas. Surges are commonly responsible for about ninety percent of all deaths from ocean storms.

The National Hurricane Center in Miami keeps close watch on severe storms. It works with government officials and with radio and television stations to keep people informed. Experts believe this early warning system has helped reduce deaths from ocean storms in recent years.

But sometimes people cannot or will not flee the path of a storm. That is what happened in some parts of Louisiana when Hurricane Isaac struck.

Studies have found that some people do not leave a storm-threatened area because they have no transportation or money for transportation. Another reason is that they fear their property will be damaged by other people, if not by the storm. Yet another reason is that people do not want to leave their farm animals or pets. Today, more plans exist for animal care during severe storms than in years before.

Weather experts use computer programs to create models that show where a storm might go. The programs combine information such as temperatures, wind speed, atmospheric pressure and the amount of water in the atmosphere.

Scientists collect the information with satellites, weather balloons and devices floating in the oceans. They also receive information from ships and passenger airplanes and other flights. Government scientists use specially-equipped planes to fly into and around storms. The crews drop instruments tied to parachutes. The instruments collect information about temperature, pressure and wind speed.

Scientists use the Saffir-Simpson Hurricane Scale to measure the intensity of storms based on wind speed. This provides an idea of the amount of coastal flooding and property damage that might be expected. The scale is divided into five groups or categories.

The mildest hurricane is a category one, which is what Isaac was at its strongest. A hurricane called "Cat One" has winds of about one hundred twenty to one hundred fifty kilometers an hour. This storm can damage trees and lightweight structures. It can also cause flooding.

Wind speeds in a category two hurricane can reach close to one hundred eighty kilometers an hour. These storms are often powerful enough to break windows or blow the tops off houses.

Winds between about one hundred eighty and two hundred fifty kilometers an hour represent categories three and four. A more powerful storm is a category five hurricane. Researchers say forces other than wind speed help cause extensive destruction. And the lower the air pressure, the stronger the storm. Water caused Hurricane Isaac's worst damage. Flooding drowned human victims. It also killed millions of dollars' worth of valuable farm animals.

Some scientists believe climate change affects major storms. They say the warming of Earth's atmosphere is already making the storms worse. Other scientists have published studies that dispute this.

In two thousand ten, a special committee of the World Meteorological Organization reported on severe storms. The committee's work appeared in the journal "Nature Geoscience." Ten scientists wrote the report. They represented both sides of the debate about climate change. The scientists reached no clear answer about whether rising temperatures on Earth had already intensified storms. Still, they made some predictions.

The committee said the changing climate might cause more powerful ocean storms in the future. It said the overall strength of storms measured by wind speed might increase two to eleven percent by the year twenty-one hundred. And there might be an increase in the number of the most severe storms. But there might be fewer weak and moderate storms.
Related Articles
go top