Update Required To play the media you will need to either update your browser to a recent version or update your Flash plugin.
By John Russell
28 May 2020


In the film A League of Their Own, actor Tom Hanks plays the coach of an American baseball team. He oversees an all-female team called the Rockford Peaches.

In one famous scene at a game, Hanks gets angry at one of the players. She begins to cry. He then says the following words: 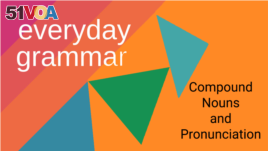 There's no crying in baseball.

That movie line has also been in the news recently. In March, while visiting Australia, Hanks tested positive for the new coronavirus. A short time later, the actor wrote on Twitter: "Remember, despite all the current events, there is no crying in baseball."

Today on Everyday Grammar, we will explore how this famous line can teach you about the link between grammar and pronunciation -- the ways in which words are spoken.

The word compound suggests two words that, together, have one meaning. The two words have become a kind of phrase or expression that acts like a noun.

Often, two nouns make up a compound. For example, the nouns book and shelf can be combined to make the compound noun bookshelf. Every student fears another kind of compound noun: a report card.

In writing, compounds sometimes have a space between the two words; sometimes they do not.

You might be asking yourself what the link is between compounds and speaking.

The idea is this: In speaking, Americans usually stress the first word in a compound. They say the first word louder or longer to show its importance. At times, stress could also mean saying something with a higher pitch in your voice.

Listen to some of the words from earlier in our report:

However, when an adjective goes before a noun, and the two words do not make a compound, then the stress should go on the noun - the second word.

So, if the adjective good goes before the noun job, then the stress goes on job. This is because good job is not a compound noun - it is just an adjective and a noun.

He did a good job.

In the book Mastering the American Accent, Lisa Mojsin writes how stress helps show a difference in meaning between a compound noun and an adjective plus noun group that is not a compound.

I went to the White House.

I went to the white house.

The first statement uses a compound noun – White House, the official home of the U.S. president.

The second statement uses an adjective and noun that do not make up a compound - white house.

Did you hear how the stress was different in the two statements?

Think back to the words Tom Hanks said at the beginning of our report.

There's no crying in baseball.

Did you hear how Hanks said baseball? Baseball is a compound noun made of the words base and ball.

In baseball, the batter is supposed to run toward first base after he or she hits the ball. You could say that the batter's attention is on getting to the first base.

Likewise, when you pronounce compound nouns, your attention should be placed on the first word, or first part of the word.

The next time you are watching an American film, try to listen for how the actors put stress on different words. Try to listen for examples of compound nouns. Try using word stress in the way we talked about today.

With time, your speaking will become clearer and more understandable to native speakers.

And remember, there is no crying in baseball!

scene – n. the place where an event happens or happened

despite – prep. without being affected by

grammar – n. the system and structure of a language

likewise – adv. in the same way