Test Yourself with This Everyday Grammar Quiz

Update Required To play the media you will need to either update your browser to a recent version or update your Flash plugin.
By Alice Bryant
21 May 2020


We have an expression in English that goes "Use it or lose it." It means that if you do not use or practice an ability, you might lose that ability.

That could not be more true about English grammar.

And here at Everyday Grammar, we do not always give you a chance to review the material we teach you. So today I am going to do that with a short quiz on some of the grammar rules I have talked about on the show.

Ready to test yourself? Then let's get started. I will ask you questions. You will have only a short time to choose your answers.

Question 1. Imagine someone is giving you directions to a supermarket. The person wants to express that finding the place is not difficult at all. Which of these could they say?

The answer is b. The supermarket is easy to find. After some adjectives, such as "easy," we use an infinitive verb — not a gerund. In the correct sentence, the infinitive is "to find."

Question 2. Since the stay-at-home orders began, many of us have been spending a lot of time at home. Suppose things were starting to become boring. How might you express it?

The answer is a: I am bored of staying at home every day. Some adjectives, such as "bored," are followed by a preposition. And after a preposition, you will find a gerund or some other noun — not an infinitive verb. In the correct sentence, the gerund is "staying."

Question 3. Suppose you were making dinner and got an important phone call. So, you set aside what you were doing and took the call. Which of these could you say?

The answer is a: I stopped to take an important call. In the correct sentence, "stop" is followed by the infinitive "to take." When we follow "stop" with an infinitive verb, it means someone suspends one action for the purpose of doing something else.

Question 4. This one is about cleft sentences. If you do not remember much about them, try reviewing them before answering the question. Which of these is an example of a cleft sentence?

a-It was the film Avengers: Endgame that led theater box offices last year.
b-It was the superheroes who held the Infinity Stones before Thanos.
c-Both are cleft sentences.

The answer is c. Both are cleft sentences. 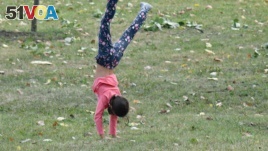 A young girl walks on her hands through the grass.

Question 5. Imagine that you wanted to tell people about a fun or unusual skill or ability from your childhood days. Which of these is a correct way to say it?

The answer is c. Both are correct. English speakers almost always use the word "could" to talk about general skills or talents from the past. "Was able to" is also possible but used less often in spoken English.

Question 6. Suppose some tree branches kept hitting the top of your house and making noise. So, you went up there and cut down the branches. What could you say after the work was done?

The answer is a. I was able to cut down the branches. When talking about a past ability during a specific occasion, we use "was (or) were able to" — not "could."

Question 7. As a reminder, a collocation is a group of two or more words that is commonly used together. Which of the following is an example of a verb + noun collocation?

The answer is b. make a mistake. All three answers are examples of collocations, but only "make a mistake" is an example of a verb + noun collocation. The verb is "make" and the noun is "mistake."

Now for our final question:

Question 8. This one also deals with collocations. Which of these is an adverb + adjective collocation?

The answer is a. happily married. The other two answers are not examples of ways we commonly put words together.

If you would like to review any of the grammar from the program today, visit our website, www.51voa.com.

Join us again soon for another chance to test yourself.

You can review the following programs to learn more about the grammar from today's quiz. And be sure to practice the grammar at home in your speaking and writing!

A Common Form: Be + Adjective + Infinitive (for Question 1)

What Are You Excited About Learning? (for Question 2)

Verbs that change with Gerunds and Infinitives (for Question 3)

Past Ability: Could, Was Able To, Managed To (for Questions 5 and 6)

practice - v. to do something again and again in order to get better at it

review - v. to study or look at something again

quiz - n. a short spoken or written test that is often taken without preparation

gerund - n. an English noun formed from a verb by adding -ing

box office - n. an area in a theater where tickets are sold for a movie or performance

clause - n. a part of a subject that has its own subject and verb

branch - n. a part of a tree that grows out from the trunk

occasion - n. a particular time when something happens