Update Required To play the media you will need to either update your browser to a recent version or update your Flash plugin.
By VOA
12 July, 2012

Counterfeit designer clothing, medicines and other products are made and sold around the world. American investigators say the counterfeit goods industry is bigger business than the illegal drug trade. And they say anyone buying such goods could be providing support to other criminal activities.

Counterfeit goods may look like the real thing. But they are only copies made without the approval of the business or individual with rights to the original product.

Many fake goods from East Asia enter the United States through the port of Los Angeles, California. People looking for low prices on goods go to a part of Los Angeles called Santee Alley. It is a place where counterfeit goods are sold. Clothing, sunglasses, watches and toys fill the many small stores in the area.

Anita Grey has been going to Santee Alley for years. She says she would never buy fake designer products, but she has seen them there. 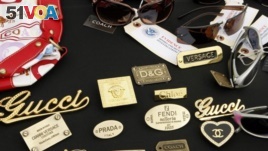 A file photo of counterfeit designer products seized in a raid by federal officials.
ANITA GREY: "I know years ago when I come down, you would see it. And now, you don't see it at all."

Investigator Kris Buckner says there is a reason people do not see counterfeit goods openly displayed at Santee Alley anymore: police have repeatedly raided stores that carry fake designer goods. As a result, people who sell them are much more careful.

Kris Buckner says they will offer buyers the fake goods, and take them to a storage area where the counterfeits are hidden. He says the estimated five hundred billion dollar a year counterfeiting industry is bigger than the drug trade. He says street gangs, international organized crime groups and even terrorists are involved with counterfeiting.

KRIS BUCKNER: "Then you have groups that have ties to Hezbollah, Muslim Brotherhood and Hamas that have engaged in this activity. The problem is it's a perfect opportunity for these guys to make money. You got to look at the global marketplace. It's estimated that 10 percent of the goods you'll see out there are estimated to be counterfeit."

At the port of Los Angeles, police seize counterfeit clothing, prescription medications, electronics and cigarettes. Investigators say large amounts of the fake and stolen designer products come from China and enter through American ports in large shipping containers. More than fourteen million shipping containers arrive in Los Angeles every year. Police are able to inspect less than one percent of them.

Police say there are ways to tell if a product is counterfeit. Look at the kind of store where the product is sold, and whether the price seems too low. If it is, it is probably a fake.


And that's the VOA Special English Economics Report. You can see a video version of this report at our website 51voa.com, where you can also read, listen to and learn American English, and leave comments on our stories. I'm Christopher Cruise.