Update Required To play the media you will need to either update your browser to a recent version or update your Flash plugin.
By Kim Varzi
13 July, 2012

The United States and Egypt have had a long and close relationship for more than thirty years. The United States has provided over one billion dollars yearly in military and economic aid to the Arab nation.

Many Egyptians have criticized the aid, saying it does not directly reach civilians. They also do not approve of what they believe is American interference in their national concerns. 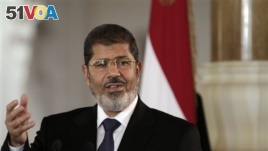 Egyptian President Mohammed Morsi speaks to reporters during a joint news conference on Friday.
On Sunday, American Secretary of State Hillary Clinton will visit Egypt. She is to meet with the newly elected Islamist President Mohamed Morsi, other senior government officials and leaders in civil society and business. The State Department says she will express American support for Egypt's democratic changes and economic development.

AHMED: "We don't ask for a lot; we don't want them to provide us the same [aid] they give Israel or the whole region. But the issue is, what is best for us - democracy, development, whatever it is."

Miz Shorbagy says Egyptians demanded respect from their government during the Arab Spring pro-democracy revolution. She believes they will demand the same from the rest of the world.

In two thousand nine, President Obama visited Cairo and made a historic speech about a new beginning between the United States and the Arab and Muslim world. He spoke about removing years of mistrust, finding common positions and relations based on shared respect.

However, Miz Shorbagy says President Obama meant well, but his words have produced an unwanted effect. She says that after the president's talk in Cairo, Egyptians increased their expectations of the United States. But none of the promises have been kept, which she believes has worsened the situation.

Mohamed is a twenty-year-old history teacher. He says he has not seen any difference in how the United States deals with Arab dictators or the Palestinian issue since the Obama speech.

Political writer Atef El Ghamry says Egypt is now in a period when Egyptians themselves, not just the government will decide foreign policy concerning the United States. He says it is important that America change a lot of its positions."

And that's IN THE NEWS in VOA Special English, written by Kim Varzi. I'm Steve Ember.