Does This Story Have Legs?

Update Required To play the media you will need to either update your browser to a recent version or update your Flash plugin.
By Anna Matteo
16 April, 2016


From VOA Learning English, it's time again for Words and Their Stories.

Legs. They are the base of the body. They provide support and balance. And, of course, we use them to walk.

Besides being a part of the body, leg also means a part of a journey or trip. For example, on the first leg of a trip, you might feel fresh and ready-to-go. But by the last leg, you might be tired and ready for sleep.

Most fashion models are very tall. They are known for having long legs. The informal adjective "leggy" describes someone with really long legs. (AP Photo/Richard Drew)

Legs have walked themselves right into many English expressions.

A useful expression using the word "legs" is to simply have them. If something has legs, it means people have interest in it.

This expression often describes a story, issue or scandal. If you are involved in a scandal that has legs, you will hear about it for a long time, which is unfortunate.

On the other hand, you can also say that something does not have legs, meaning no one is interested. This expression is commonly heard in newsrooms and politics.

Now, I will demonstrate the power of a preposition. If I add "up" to the expression "has legs," you have a whole new expression with a whole new meaning.

To have a leg up means that you are ahead of others in some competition.

For example, if you are studying rocket science in college and your mother is a rocket scientist, you have a leg up on other students.

Your mother can help you understand difficult concepts. You would have another a leg up if your father owned the local rocket factory.

"Having a leg up" is much better than not having a leg to stand on. This expression means that a person has no proof or evidence to support their actions or opinions.

Enjoy this English in a Minute video. It shows how to use the idiom "not have a leg to stand on."

This expression is not new. Someone used it for the time over 500 years ago!

Keep in mind when using this idiom that it is only used in the negative form. So, don't drop the "not!"

Now, let's move our legs to the sea. Imagine you are on a boat that is rocking back and forth in rough ocean waters. You are unable to walk steadily and you feel a little sick. This is because you haven't found your sea legs. 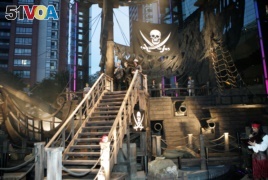 Sea legs are the ability to move about and not feel sick while traveling on a boat or ship.

If you are a pirate and you don't have a good pair of sea legs, your career may not progress as you would hope.

Now, the meaning of leg work is just as it sounds, the physical part of any task. For example, a political campaign involves planning and organization, but it also requires a lot of leg work. A candidate needs to talk to as many voters as possible. This means knocking on doors, standing at metro stations and going to community meetings.

So, if someone tells you that running a political campaign is easy office work, they are pulling your leg.

To pull someone's leg is to tell a lie but in a friendly way. You can tell someone to not pull your leg. Or you can ask them if they are, as in this example:

A: I just won two free tickets to the big rock concert tonight and a free dinner on a night-time boat cruise! Do you want to join me?

B: Are you pulling my leg?! That sounds too good to be true.

Some language experts say this expression may have come from a group in England many years ago call the "trippers-up." They were criminals who robbed people by pulling their legs out from under them.

Besides pulling a leg, you can also tell someone to shake a leg. This means to hurry. You often hear parents telling children to "shake a leg" when they are getting ready for school in the morning -- or perhaps not getting ready.

Actors often hear "break a leg" before heading on stage in the U.S. Pictured is a scene on stage from "Familiar," a Danai Gurira's play. (Photo courtesy of Joan Marcus)

Saying break a leg to someone performing on stage is the same as saying "good luck."

In the theater, saying "good luck" is actually considered to be bad luck.

Saying "break a leg" is a tradition for actors and musicians, but not for dancers. Telling a dancer to break a leg would just be mean.

Lastly, we come to last legs. If you find yourself on your last legs, you had better sit down for a while and rest.

However, this expression does not have to be used just for a person.

But Words and Their Stories is not on its last legs!

This show has been going strong for several decades! So, please listen, Like, Share and Comment to make sure this show has legs to stand on in the years to come!

ZZ Top is the rock band singing about legs at the end of the show. The song is simply called, "Legs."

Do you have any expressions using "legs" in your language? Do you tell actors to "break a leg" before heading on stage? Let us know in the Comments Section.