Update Required To play the media you will need to either update your browser to a recent version or update your Flash plugin.
By Hai Do
20 June, 2016

The campaign did not say why Lewandowski was dismissed, but the Associated Press reported that Lewandowski's poor relationship with Republican leaders was the reason.

Trump is the likely Republican nominee against Democrat Hillary Clinton in the general election for president this fall. 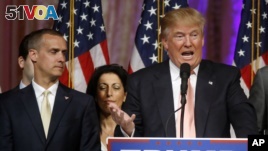 Lewandowski had been with Trump since the start of the campaign a year ago. Lewandowski was behind the idea that the best campaign strategy was to "Let Trump be Trump."

During the Republican primaries, Trump's campaign spent little money on staff, advertising or organization. The campaign relied on news coverage of Trump's controversial statements, his followers and his celebrity to win.

Lewandowski often traveled with the candidate. At one campaign event in Florida, Lewandowski grabbed a female reporter and was charged with a misdemeanor. The charge was later dropped.

Trump spokeswoman Hope Hicks told The New York Times, "Lewandowski will no longer be working with the campaign." She paid tribute to his "hard work and dedication" and wished him the best.

Trump won enough delegates to secure the Republican nomination for president. The party is expected to nominate him at their convention in mid-July.

But Trump is facing difficulty in uniting Republicans behind his candidacy.

Many Republicans criticized Trump for saying that Judge Gonzalo Curiel is biased because of his Hispanic heritage. Curiel is the judge overseeing the lawsuit against Trump University.

Others denounced Trump for his remarks after the recent shooting in Orlando, Florida that killed 49 people and injured another 53. The candidate tweeted "appreciate the congrats for being right on radical Islamic terrorism."

Clinton has already started advertising in several states where she and Trump are expected to have a close race. Trump has not released any ads for the general election yet.

The Trump campaign's statement about its former manager said in full: "The Donald J. Trump Campaign for President, which has set a historic record in the Republican Primary having received almost 14 million votes, has today announced that Corey Lewandowski will no longer be working with the campaign. The campaign is grateful to Corey for his hard work and dedication and we wish him the best in the future."

After the news of Lewandowski's dismissal, one of Trump's aides, Michael Caputo, tweeted, "Ding dong the witch is dead!"

Hai Do adapted this story based on information from the Associated Press, Reuters and The New York Times. Kelly Jean Kelly was the editor.

nominee – n. someone who has been chosen as a candidate

misdemeanor – n. a crime that is not very serious

tribute – n. something that shows respect or affection for someone

delegates – n. people who are chosen or elected to vote or act for others