Iran Claims It Has Stopped a Major Terrorist Attack

Update Required To play the media you will need to either update your browser to a recent version or update your Flash plugin.
By Christopher Jones-Cruise
20 June, 2016

The reports say it was one of the biggest attacks ever planned against the capital Tehran and other provinces in the Islamic Republic.

In a statement, the intelligence ministry said it had arrested several suspects and seized bombs and ammunition. Officials are questioning the suspects. The statement provided few other details. 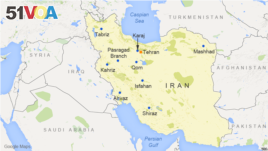 Iran's Supreme National Security Council chief reportedly said the attack was planned for the Muslim holy month of Ramadan. Iran's state-run IRNA news agency reported the intelligence ministry said the attack had been set for the anniversary of the death of the Prophet Muhammad's wife, Khadija. Iranians held small ceremonies on Thursday in honor of the anniversary.

The IRNA report called those who had been arrested "Wahhabi takfiris." Takfiris is an insulting word in the Arabic and Farsi languages for Muslims who accuse others of being "nonbelievers."

Iranian officials often use the word when they talk about supporters of the Sunni militant Islamic State (IS) terrorist group.

Wahhabism is a very conservative form of Islam practiced mostly in Saudi Arabia.

Iran is a Shi'ite Muslim country. It has been fighting the Islamic State and helping both Syria and Iraq fight the group.

Tensions have been growing between Iran and Saudi Arabia since January. That month, Saudi officials executed a Shi'ite Muslim clergyman who had criticized the government.

Iranians protested the killing in Tehran, setting fire to the Saudi Embassy there.

Recently, Iran announced it would not be sending people to Saudi Arabia for the Hajj pilgrimage. It said Saudi Arabia did not meet its requests for better security for Iranian visitors.

The Associated Press news agency reported this story from Tehran and the United Arab Emirates. Christopher Jones-Cruise adapted it for Learning English. Caty Weaver was the editor.

practice – v. to live according to the customs and teachings of a religion

pilgrimage – n. a journey to a holy place