Update Required To play the media you will need to either update your browser to a recent version or update your Flash plugin.
By Christopher Jones-Cruise
19 June, 2016

If it takes place, the multi-billion dollar deal would be one of the largest since Iran reached an agreement with Western powers last year to limit its nuclear activities.

"We have 250 planes in the country; 230 need to be replaced," said Ali Abedzadeh, the head of Iran's civil aviation body. Most of them were bought before Shah Mohammad Reza Pahlavi was ousted in the Islamic Revolution in 1979 and Islamists took power. 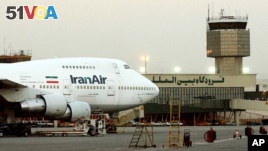 FILE - In this June 2003 file photo, a Boeing 747 of Iran's national airline is seen at Mehrabad International Airport in Tehran. Boeing Co. is negotiating a deal to sell 100 airplanes to Iran, state-run media reported Sunday, June 19, 2016 a sale potentially worth billions that would mark the first major entry of an American company into the Islamic Republic after last year's nuclear deal. (AP Photo/Hasan Sarbakhshian, File)

It has been almost impossible for Iran to buy the supplies necessary to repair the planes because of the economic restrictions put in place by many countries because of Iran's nuclear activities.

Iran's state-run IRNA newspaper said the negotiations were not yet complete because a final agreement on costs had not yet been reached. But it reported that the head of the aviation agency said "both sides -- Iran and Boeing -- have reached a written agreement for buying Boeing airplanes."

In April, the IRNA news agency reported that, during a trip to Tehran, Boeing officials had offered to sell to members of the Society of Iranian Airlines a number of its 737, 777 and 787 model aircraft.

Boeing would not confirm the negotiations or the number of planes being discussed.

The U.S. State Department has been urging American companies to sell their products and services in Iran. But many companies are worried about possible legal or political problems if they do so. That is because there are still U.S. sanctions in place that were not eased or ended by the nuclear agreement.

Some American lawmakers have warned Boeing not to sell its planes to Iran. The nuclear agreement is being debated in the presidential campaign. If the deal is to be completed, Boeing may be forced to sell the planes to Iran through a company it owns in another country. And it may need to complete the deal using a currency other than the American dollar to avoid violating U.S. laws.

U.S officials must decide whether or not to permit the sale to be completed. As part of the nuclear agreement, the U.S. Treasury Department must review the sale of passenger planes to Iran.

The nuclear agreement said airline manufacturers could sell planes to Iranian companies. Iran Air has already agreed to buy 118 planes from the European airplane manufacturer Airbus at a cost of about $25 billion, and 20 from a French-Italian aircraft manufacturer. This deal, however, requires approval from U.S. officials since more than 10 percent of Airbus materials come from the United States.

Christopher Jones-Cruise adapted this report for Learning English based on reports from VOANews and the Associated Press and Reuters news agencies. Hai Do was the editor.

model – adj. a particular type or version of a product (such as a car or computer)

sanctions – n. an action that is taken or an order that is given to force a country to obey international laws by limiting or stopping trade with that country, by not allowing economic aid for that country, etc. — usually plural

currency – n. the money that a country uses