Obama: 'Our Hearts Are Broken, Too'

Update Required To play the media you will need to either update your browser to a recent version or update your Flash plugin.
By Bryan Lynn
16 June, 2016

Obama met privately with relatives at Amway Center, a stadium not far from the gay nightclub where a lone gunman opened fire early Sunday, killing 49 people and injuring 53 others.

Vice President Joe Biden also traveled to Orlando. In remarks after the meetings, Obama said the families are feeling "grief beyond description."

"Today the Vice President and I told them on behalf of the American people, that our hearts are broken, too, and that we stand with you and that we are here for you."

Obama said it was difficult for him to console family members after a violent tragedy.

"So today, once again, as has been true too many times before, I held and hugged grieving family members and parents. And they asked ‘Why does this keep happening?' And they pleaded that we do more to stop the carnage. They don't care about the politics, neither do I." 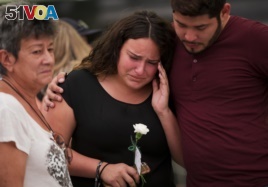 Glorymar Valley, center, is comforted by Christian Caballero, right, and Natividad Rivera, as they mourn the loss of their friend Javier Jorge-Reyes

Obama repeated his earlier statements that the Orlando attack was both an act of terrorism, and an act of hate. "This was an attack on the LGBT community. Americans were targeted because we're a country that has learned to welcome everyone – no matter who you are or who you love."

Obama also pledged that the government would "be relentless" against terrorist groups like Islamic State and al-Qaida.

But he noted that both the Orlando attack and the San Bernardino shooting that killed 14 people were "lone wolf" attacks without direct involvement from foreign terror groups. He added that these kinds of attacks will take more than good military tactics and intelligence to prevent.

Obama and Biden also visited survivors of the attack. Officials said Thursday that 23 people remain hospitalized – six of them in critical condition. They also met with and thanked local law enforcement, first-responders and medical teams who treated the victims.

The two men laid flowers at a memorial for victims outside the city's Dr. Phillips Center for the Performing Arts. The area - filled with flowers, balloons, photos and tributes - was the site of a candlelight vigil Monday attended by thousands.

As authorities continue to investigate the gunman, Omar Mateen, new information was released about his social media activity before and during the attack.

Mateen used Facebook to search the terms "Pulse Orlando" and "shooting" from inside the nightclub, according to Chairman Ron Johnson of the Senate Homeland Security Committee. Apparently he searched to see how much publicity the attack was generating.

In Facebook posts, the killer also pledged allegiance to Islamic State leader Abu Bakr al-Baghdadi, and called for an end to U.S. and Russian bombings of the militants.

"You kill innocent women and children by doing us airstrikes... now taste the Islamic state vengeance," Mateen wrote, according to the letter. In a final post, he also warned of more U.S. attacks in coming days.

The information is contained in a letter Johnson sent to Facebook CEO Mark Zuckerberg in which his committee requests all available data on the gunman. Johnson said at least five Facebook accounts were associated with Mateen.

The letter said the committee found Mateen also used Facebook in May to search for information on the killers in the San Bernardino mass shooting.

Bryan Lynn wrote this story for Learning English based on reporting from Chris Hannas of VOA with additional reports from the Associated Press and Reuters. Hai Do was the editor.

carnage – n. the killing of a large number of people

lone wolf – n. a person who acts alone, such as a terrorist

allegiance – n. have loyalty to a person, country or group

vengeance – n. act of doing something hurtful to someone in response to some harm or injury

We want to hear from you. Write to us in the Comments section, and visit 51VOA.COM