Soccer Tensions High in US, Europe


Russia's soccer team could be disqualified from the UEFA Euro 2016 soccer tournament in France because of its fans' involvement in fighting.

The European soccer competition involving 24 teams started last week, but the fighting off the field has received a lot of attention.

People are talking about the fights between fans from Russia and England in the French city of Marseille on Saturday. 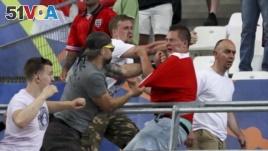 Clashes break out in the stands during the Euro 2016 Group B soccer match between England and Russia, at the Velodrome stadium in Marseille, France, Saturday, June 11, 2016. (AP Photo/Thanassis Stavrakis)

The two teams finished the game tied, 1-1, but more than 35 people were injured during fights in and around the soccer stadium.

French police are sending 29 Russians home as a result of the violence.

UEFA is the governing body for soccer in Europe. It fined the Russian team about $168,000. Tuesday, UEFA said the team will be disqualified if its fans do not behave.

Russian spokesman Dmitry Peskov called the fighting "unacceptable." He asked Russian fans to obey the laws of the host country and behave themselves while in France.

One Russian player said the team does not want to be removed. Russia will play Slovakia on Wednesday in the French city of Lille.

British police are also looking for fans who fought in France and will ban them from attending soccer games at home.

Close to Lille, officials are concerned about Thursday's game between two British teams in the French city of Lens. England will play against Wales. Two thousand four hundred security officers will be on duty.

Other fans were fighting, too. In the city of Nice, seven people were hurt in fights between fans from Northern Ireland and local residents.

Two people were hurt in fights between fans from Germany and Ukraine.

The French minister of the interior called the fighting "unacceptable" and asked that sales of alcoholic beverages be banned leading up to games.

On the field, teams have completed one round of games. They are getting ready for the second round. Teams including France, Wales, Spain, Germany and Italy already have one win.

The game on Monday between Italy and Belgium was possibly the most exciting of the tournament so far. Belgium is the second-ranked team in the world according to FIFA. Italy is ranked 12th.

The Azzurri, as the Italian team is known, scored in the 32nd minute. The team scored again just before the final whistle for a 2-0 victory.

There is another big soccer tournament taking place. The Copa America is being played in the United States for the first time. The tournament is traditionally played among the teams from countries in South America. This time, however, the tournament includes teams from North America, Central America and the Caribbean.

The tournament is heading into the elimination phase. Colombia, the United States, Mexico, Argentina, Ecuador and Venezuela all advanced to the next part of the tournament. The most surprising team may be Venezuela, which defeated both Jamaica and Uruguay and tied Mexico.

Brazil and Uruguay are the two notable teams that failed to advance to the elimination phase.

Brazil is the most famous soccer nation in the world. Uruguay had trouble scoring, playing without Luis Suarez, its star player. Suarez was with the team but could not enter any games because he did not heal from an injury.

In the most controversial game of the tournament, Peru defeated Brazil 1-0. It was the first win by Peru over Brazil in 30 years.

The goal came on a hand ball that referees did not see. A scoreless tie would have qualified Brazil to continue, but instead, Peru will keep playing.

After seeing the goal, soccer fans are calling for referees to use video replays to confirm goals.

Dan Friedell wrote this story for Learning English based on reporting by the Associated Press and VOANews.com. Mario Ritter was the editor.

Which team do you think will win the big summer soccer tournaments? We want to know. Write to us in the Comments Section or on 51VOA.COM.

hand ball – n. when a soccer player illegally uses his hand to direct the ball into the goal

elimination – n. the act of removing something

host – n. a person or group who is holding an event or entertaining guests